WASHINGTON, D.C. -- Americans' confidence in the economy last month was unchanged from December. Gallup's U.S. Economic Confidence Index averaged -11 for the month of January. This is much higher than most monthly averages recorded since 2008, but is still below the post-recession high of +3 found in January 2015. 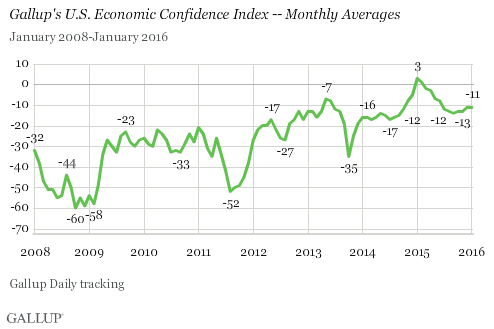 Gallup did observe a brief spike in confidence in mid-January, immediately after President Barack Obama's State of the Union address in which he touted certain economic successes, including the creation of private-sector jobs and growth in the auto industry. However, confidence during the remainder of the month was lower, resulting in no change in the overall index from December.

After peaking a year ago as gas prices continued a steady decline, the index fell slightly for eight consecutive months beginning in February, reaching the 2015 low of -14 in September. The index has not strayed far from September's low, with the latest -11 reading marking a slight improvement.

In January, 26% of Americans rated current economic conditions as "excellent" or "good," while 29% rated them as "poor." This resulted in a current conditions score of -3, similar to the -4 in December. Meanwhile, the economic outlook score was -18, matching the November and December scores. This was the result of 39% of Americans saying the economy is "getting better" and 57% saying it is "getting worse." Democrats remain most confident in the economy, with an index score of +18 -- up six points from December. This improvement suggests that they received the greatest boost from the president's positive comments on the U.S. economy during his State of the Union address last month.

Independents still have an overall negative view of the economy. Though confidence among this group is up slightly from the past few months' averages, the index score among independents has not moved a great deal since May 2015, ranging from -12 to -16.

Republicans' confidence is now at a two-year low after dipping further to -41 in January, a decline from its recent high of -19 in January 2015. Americans' assessment of the U.S. economy continues to skew negative, as it has for most of the past year. This is the case both in their view of current conditions and their sense of the economy's direction. While low gas prices have helped keep confidence stable and -- at least in recent months -- modestly improving, turmoil in the stock market and reports of slow retail sales may be weighing down any perceived improvements in the U.S. economy.

Other indicators, such as the unemployment rate, do provide glimmers of economic hope, but Americans remain jaded about the health of the national economy and have been hesitant to view it positively. Politics, however, play a role in how positively or negatively Americans view the economy. While the president's encouraging statements about the economy likely renewed some hope among Democrats and independents, those in the Republican Party, perhaps influenced by the presidential campaign, have become more pessimistic about the economy.

Results for this Gallup poll are based on telephone interviews conducted Jan. 1-31, 2016, on the Gallup U.S. Daily survey, with a random sample of 15,173 adults, aged 18 and older, living in all 50 U.S. states and the District of Columbia. For results based on the total sample of national adults, the margin of sampling error is ±1 percentage point at the 95% confidence level. All reported margins of sampling error include computed design effects for weighting. Gallup's Economic Confidence Index averaged -11 in December, slightly better than averages from July through November. Confidence was a bit lower in December than in early 2015, but better than it's been for most of the time since 2008.