WASHINGTON, D.C. -- In a shift from January, slightly more U.S. adults believe the news media has not been tough enough (37%) in its coverage of President Donald Trump as say it has been too tough (32%). Shortly after Trump was inaugurated, these sentiments were reversed: 36% thought the media was too tough on him and his administration, and 28% said it was not tough enough.

Only about one in four Americans, down from 31% in January, now believe the media's coverage of Trump is about right.

As expected, there are strong partisan differences in these views. Most Republicans (64%) say the media has been too tough on Trump, whereas nearly as many Democrats (59%) say it has not been tough enough. However, both numbers are less favorable toward Trump than in January, when more Republicans than today (74%) thought the press was being too hard on him and fewer Democrats (49%) thought it wasn't being hard enough.

Underscoring the difficulty the media has pleasing either side, just 21% of Republicans and 27% of Democrats say its coverage of Trump has been about right. Relatively few independents also think the coverage is appropriate, while the remainder are about evenly divided between saying the media has been too hard or too easy on Trump.

The latest results are based on a Gallup survey conducted March 9-29.

A different question in the poll yields a similar divide in Americans' reaction to the Trump-media conflict, but with a bit more detail. By 37% to 33%, Americans are slightly more likely to side with the media than with Trump in the ongoing disagreements between the two. However, less than half of each group "strongly" favors its chosen side. As a result, just 17% of all adults strongly side with the media, and 13% strongly side with Trump.

This leaves 40% feeling more moderately sympathetic toward either Trump or the media. And when factoring in those who favor neither side or who have no opinion on the matter, 71% of Americans appear somewhat uncommitted on the matter. When running for president in 2016, Trump waged a parallel campaign against the news media, accusing it of being biased and purveying "fake news." Trump has only leaned into this theme since becoming president, at times calling the press "dishonest," "out of control" and "the enemy of the people" over what he considers hostile coverage of his administration.

Trump did not invent the idea that the media is flawed -- since 2000 a majority of Americans have thought that press reports are "often inaccurate." However, a growing percentage thinks the media is biased and that it favors the Democrats.

Still, rather than Trump's jabs at various reporters and news organizations convincing Americans that the media is too tough on him, more Americans than in January now believe the press is not being tough enough on Trump. As a result, the percentage saying the media's coverage is on target has fallen to 24%. Yet, relatively few Americans strongly side with either Trump or the press. The vast majority express a more lukewarm allegiance or side with neither, suggesting the discord is producing no real winner.

Results for this Gallup poll are based on telephone interviews conducted March 9-29, 2017, with a random sample of 789 adults aged 18 and older, living in all 50 U.S. states and the District of Columbia. For results based on the total sample of national adults, the margin of sampling error is ±4 percentage points at the 95% confidence level. All reported margins of sampling error include computed design effects for weighting. 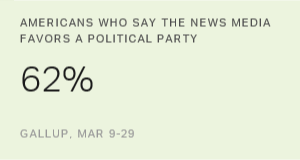