Gallup began tracking religion using this measure in 2008, and the nationwide proportions of Americans in each of the three religious categories have remained generally stable since then. The percentage "very religious" is slightly higher in 2013 than it was in 2012, 2011, and 2008, while the percentage of nonreligious Americans is slightly lower in 2013 than in any previous year. 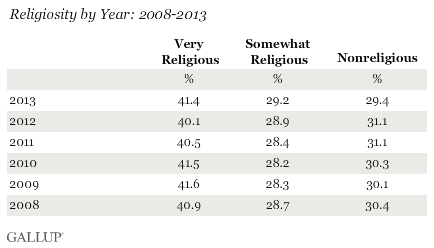 The U.S. remains a religious nation -- with about seven in 10 Americans classified as very or moderately religious -- and the nation's residents as a whole are about as religious now as they were in 2008. The religiousness of the nation's residents, however, does vary substantially by state and region. The most religious areas continue to be the South, the state of Utah, and the Midwestern Plains states, while the least religious areas are mostly in New England, the Pacific Northwest, and other Western states.

These regional variations are quite stable and look generally the same now as they did six years ago. They reflect basic state cultures that are highly persistent, even as states experience demographic changes through births, deaths, and migration.

Additionally, although states vary significantly in their racial and ethnic composition, differences in religiosity between states persist even among residents of the same races. Whites in Mississippi are more religious than whites in Vermont, and blacks in New England are less religious than blacks in the South.

Utah is the exceptional state. Mormons are the most religious of any category or denomination Gallup routinely measures, and Utah's majority Mormon population clearly explains why Utah stands out so remarkably from its much less religious neighboring states.

Results for this Gallup poll are based on telephone interviews conducted Jan. 2-Dec. 29, 2013, on the Gallup Daily tracking survey, with a random sample of 174,699 adults, aged 18 and older, living in all 50 U.S. states and the District of Columbia.