PRINCETON, NJ -- Americans rate North Korea the least favorably of 22 countries rated in Gallup's 2014 World Affairs poll, with 11% having a favorable opinion of the country. North Korea took over the bottom spot from Iran, whose rating rose from 9% to 12% this year. North Korea's favorability has not exceeded 15% since 2002, consistently making it one of the lowest rated. But this is the first time since 2004 that it has been alone in last place. 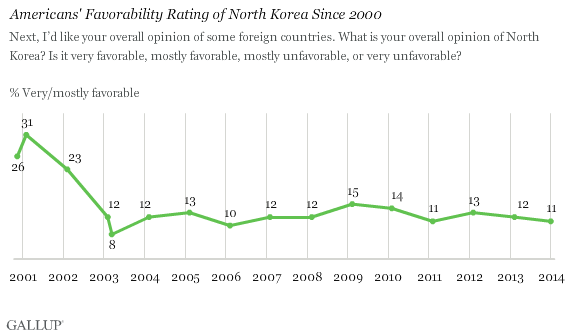 North Korea's position at the bottom of the list is mainly attributable to a slight improvement in Americans' opinions of Iran. Iran had been the worst-rated country since 2004. North Korea now immediately trails Afghanistan (14%), Syria (13%), and Iran (12%). See page 2 for the full ranking of the 22 countries.

The current data come from the 2014 update of Gallup's annual World Affairs survey, conducted Feb. 6-9. The poll was conducted shortly before the United Nations announced the results of a yearlong study concluding that North Korea has committed crimes against humanity, which could lead to the arrest of the North Korean leader Kim Jong-un, as well as drive Americans' perceptions of the country even lower. Americans' opinions of the country fell sharply in 2002, when President George W. Bush labeled the country a member of the "axis of evil" in his State of the Union Address, and have not recovered.

In contrast, Americans have much more positive attitudes toward South Korea, with 64% viewing the country favorably. Americans' views of South Korea have steadily grown more positive since its initial sub-50% favorable rating in 2001. 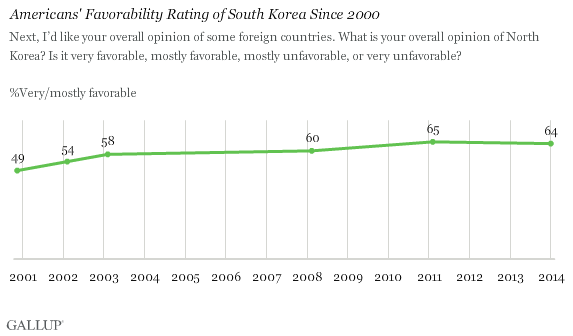 Majority View Conflict Between North and South as a Critical U.S. Threat

The conflict between North and South Korea escalated last year after North Korea's nuclear tests prompted U.N. condemnation and the country's withdrawal from all non-aggression pacts with South Korea. More recently, the two sides have been talking, and while tensions flared over the South's refusal to cancel joint military exercises with the U.S., negotiators agreed Friday to go forward with a cross-border reunion of 200 people. 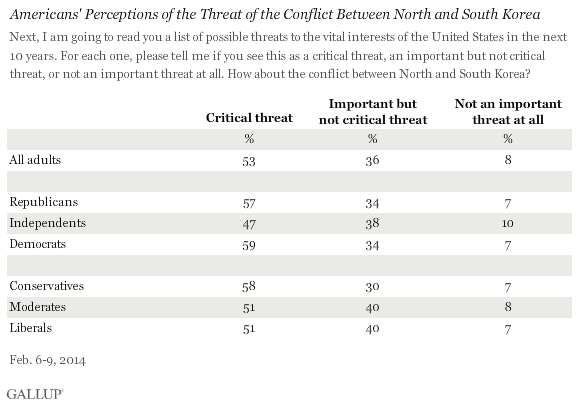 Recent coverage of North Korea in the American press has ranged from news of last year's nuclear threats and political posturing to the unusual friendship between former NBA star Dennis Rodman and Kim Jong-un, events that did nothing to improve the country's image in the American public's eyes. Americans have had an overwhelmingly unfavorable view of North Korea for many years. Even before Bush included North Korea in the "axis of evil" in 2002, roughly six in 10 Americans viewed the country unfavorably. However, by 2003, North Korea's U.S. image had soured further, and has never recovered. Today, with tensions high between North and South Korea, Americans see the conflict as a threat to vital U.S. interests.

The report of the U.N. panel, which concluded that human rights abuses have occurred in North Korea, has brought the country into the international spotlight once again, and could push its image in the U.S. even lower. Though with about one in 10 Americans giving the country a favorable rating, there is not much farther for it to fall. 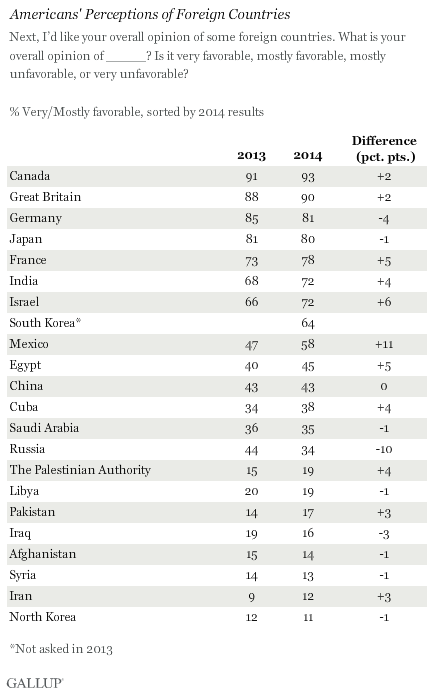 As President Obama announces a new diplomatic initiative toward Iran, most Americans continue to consider Iran an enemy of the U.S. or unfriendly. In the past, Americans have supported direct talks with Iran.