From the Gallup Vault: Two months before Ronald Reagan won the 1980 presidential election, the No. 1 concern Americans had about him -- out of a list of 12 potential concerns Gallup presented -- was that he "puts his foot in his mouth, says things without thinking or considering the consequences." Fifty-two percent of Americans told Gallup this concerned them about the Republican presidential nominee, just ahead of the 48% citing his age and the 42% saying he "might get the country into a shooting war." 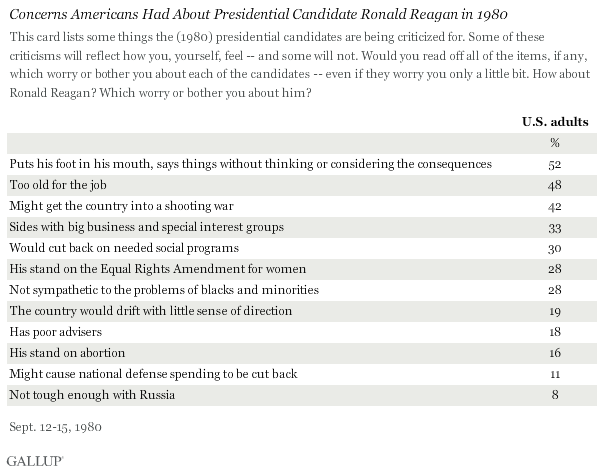 These results are from a Gallup in-person survey in which respondents were given a card listing 12 prominent criticisms of the three 1980 presidential candidates and were asked to say which concerns, if any, worried or bothered them about each candidate.

The 52% of Americans concerned about Reagan's speaking habits far exceeded the percentages citing this as a concern about his opponents. Thirty percent said foot-in-mouth behavior concerned them about Democratic President Jimmy Carter and 21% about independent candidate John Anderson. Indeed, Carter ran an ad against Reagan featuring Californians criticizing their former governor as someone who "shoots from the hip."

This didn't prevent Reagan from winning that year's election by a landslide, perhaps in part because large percentages of Americans had serious concerns about his opponents -- namely that Jimmy Carter had poor advisers (63%) and was not tough enough with Russia (55%), and that if John Anderson became president, "the country would drift with little sense of direction" (44%). Beyond these perceptions, a number of economic, foreign policy and campaign forces were at play in 1980, which also contributed to the outcome.