PRINCETON, NJ -- Americans now assign about equal importance to the two major aspects of immigration reform being debated in Washington. Forty-four percent say it is extremely important for the U.S. to develop a plan to deal with the large number of immigrants already living in the United States, and 43% say it's extremely important to halt the flow of illegal immigrants into the country by securing the borders. This is a shift from the past, when Americans were consistently more likely to rate border security as extremely important.

These results are based on a Feb. 6-9 Gallup poll. President Barack Obama has made immigration reform a priority this year, although the prospects of such legislation passing in an election year are dim. Since George W. Bush's second term as president, Washington leaders have tried unsuccessfully to pass comprehensive immigration legislation that deals with both border security and illegal immigrants already living in the U.S.

Compared with 2011, Americans of all partisan orientations have come to view border security as less important. Meanwhile, their views on the importance of devising a plan to deal with illegal immigrants already in the United States have been largely stable. 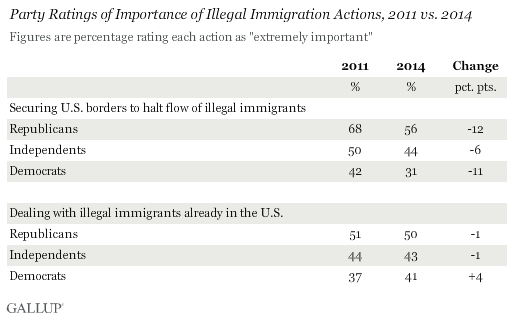 The equal importance Americans place on the two main immigration challenges does not give government leaders much guidance as to which they should attempt to resolve first if they opt for a piecemeal approach to immigration reform. However, Gallup has historically asked Americans to choose which of the two is more important. Prior to 2012, Americans tended to favor border security, in line with the higher percentages rating it as extremely important. Since then, Americans have tilted in the direction of addressing the status of illegal immigrants already in the U.S. Still, the gap is small, suggesting this is not an overwhelming preference, and that a strategy that attempts to deal with both issues may be preferable. 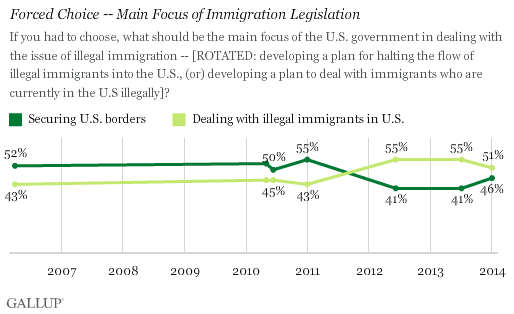 Republicans place a greater priority on securing U.S. borders, by 55% to 42%. Meanwhile, Democrats think the government should focus on resolving the status of illegal immigrants living in the U.S., 59% to 40%.

But Republicans are less likely to prioritize border security than in the past. In 2011, they favored border security by 67% to 32% -- helping explain the recent shift in Americans' views about what the government should focus on.

In a broad sense, Americans do not assign as high a level of urgency to immigration reform as to other issues the government could work on, such as the economy, education, and healthcare policy. Still, they do think it is important for the government to take steps to deal with the two major challenges presented by the current immigration situation -- keeping illegal immigrants out and resolving the legal status of the millions of illegal immigrants already living in the U.S.

In the past, Americans gave a higher priority to securing U.S. borders, but they now rate dealing with illegal immigrants already in the country as equally important, if not more so, when forced to choose. The relative importance of the two would matter less if Congress and the president were able to agree on comprehensive legislation that dealt with both issues. And that may still be a possibility in the future, but it seems unlikely to happen this year. Whether the chances improve next year may depend on which party gains seats in this fall's congressional elections.