PRINCETON, NJ -- American politics over the last decade has become notoriously polarized, with congressional Republicans and Democrats disagreeing on the best way to address healthcare, immigration, taxes, and a host of other issues. But supporters of both parties do agree that the economy should be a top priority, with 91% of Democrats and 88% of Republicans saying it is extremely or very important that the president and Congress deal with that issue this year. There is less agreement on the other issues the federal government should focus on. 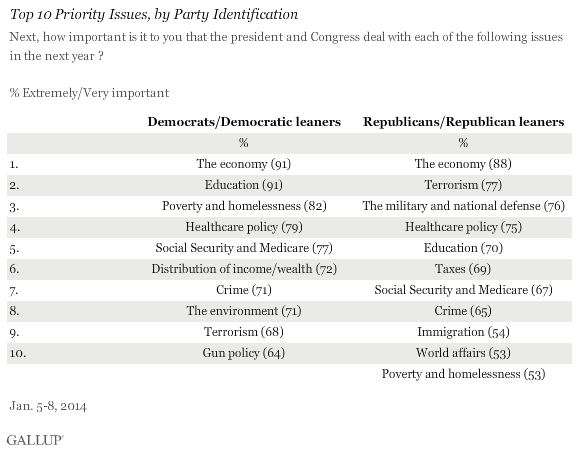 These results are from Gallup's annual Mood of the Nation survey, conducted Jan. 5-8.

In addition to the economy, the four top issues that Democrats rate as high priorities are education, poverty and homelessness, healthcare policy, and Social Security and Medicare. At least three in four Democrats rate each of these issues as extremely or very important for the federal government to deal with.

By contrast, at least three in four Republicans feel that terrorism, the military and national defense, and healthcare should be high-priority issues for the president and lawmakers this year. Education, at 70% extremely or very important, rounds out Republicans' top five priorities.

Overall, Democrats and Republicans share seven of each other's top 10 priorities -- the economy, education, healthcare, terrorism, crime, Social Security and Medicare, and poverty. Democrats, but not Republicans, rank the distribution of wealth, the environment, and gun policy as top priorities. Republicans rank the military, taxes, immigration, and world affairs in their top 10.

Partisans Most Divided on Prioritizing the Environment, Distribution of Wealth

Democrats are particularly more likely to assign a high priority to government efforts to address the environment, with a 39-percentage-point gap separating the parties.

Democrats and Republicans also differ substantially in their rankings of the distribution of income and wealth (with Democrats 34 points higher) and poverty and homelessness (29 points). Democrats are also more likely than Republicans to prioritize education, gun policy, race relations, policies toward gays and lesbians, energy policy, and Social Security and Medicare.

Republicans are more likely than Democrats to say the president and Congress should prioritize the military and national defense (15 points), and taxes (13 points). Republicans also assign a higher priority to terrorism, government surveillance, and immigration. 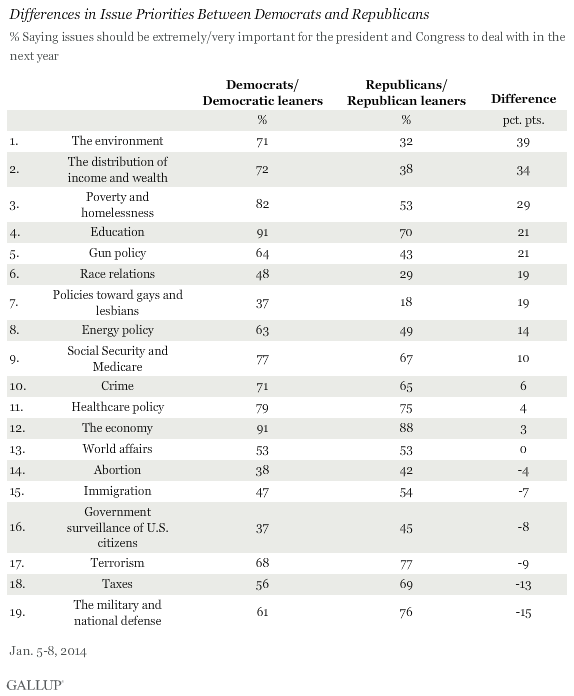 Altogether, three issues can be considered bipartisan priorities -- receiving extremely/very important ratings from at least 70% of Democrats and Republicans. These include the economy, education, and healthcare policy.

Four issues are Democratic priorities, which at least 70% of Democrats rate highly but are rated significantly lower (and lower than 70%) by Republicans: the distribution of income and wealth, poverty and homelessness, Social Security and Medicare, and the environment.

Two issues are Republican priorities, rated above 70% by Republicans, but not as high by Democrats: the military and national defense, and terrorism.

As President Barack Obama prepares to deliver his State of the Union address Tuesday evening, he will be facing a national audience that, regardless of partisanship, agrees on one thing: the economy should be the government's highest priority. Democrats and Republicans alike also put education and healthcare policy among their top five priorities. Beyond that, however, the two groups disagree, with Democrats prioritizing poverty and homelessness, income inequality, Social Security and Medicare, and the environment, while Republicans prioritize the military and defense, and terrorism.

For results based on the total sample of Democrats, the margin of sampling error is ±5 percentage points at the 95% confidence level.

For results based on the total sample of Republicans, the margin of sampling error is ±5 percentage points at the 95% confidence level.