PRINCETON, N.J. -- Even though Bernie Sanders, a self-described "Democratic socialist," has generated strong support for his presidential campaign, Americans' image of socialism is no better now than it was six years ago. Thirty-five percent of Americans have a positive view of the term socialism, similar to what was found in 2012 and 2010. The 60% who have a positive view of capitalism is also unchanged from six years ago.

These seven terms were measured May 2-4 using Gallup Daily tracking, updating previous measurements taken in November 2012, just after that year's presidential election, and in January 2010.

The rank order of positive reactions has been the same at each of the three time periods, with only minor fluctuations in the percentage of Americans holding a positive image of each concept. Positive views of big business, for example, are down a little from 2012 but remain higher than in 2010. Views of the federal government are also slightly less positive than three-and-a-half years ago but are now about where they were in 2010.

Democratic presidential candidate Sanders focused his campaign on criticism of big business and promoted the value of a bigger role for the federal government in economic and social life, including his proposals for a "Medicare for all" federally funded healthcare system. At the same time, the presumptive Republican nominee, Donald Trump, is himself a businessman who has, along with many of the other Republican challengers, focused on criticizing the government while saying that he would run it more like a business. However, none of this has apparently made a major difference in the ways in which Americans think about these economic terms.

Democrats, on the other hand, are much more positive than Republicans about the federal government and socialism. Notably, Democrats have a more positive image of socialism than they do of big business, and their images of socialism and capitalism are essentially the same. These broad patterns are similar to what was found in 2012.

These results show the presidential campaign has not changed Americans' images of a number of commonly used political and economic terms. Americans react almost universally positively to the term small business and also have very positive reactions to free enterprise and entrepreneurs. Overall reactions to capitalism are also positive and significantly more so than views of socialism, which is the least-liked term of any tested.

Americans are mixed in their reactions to big business and the federal government, with slightly more positive views of the former than the latter. Notably, Americans are less positive about capitalism and big business than they are about free enterprise and small business, highlighting the different ways in which these terms resonate with the public.

The results show that several of these terms are politically charged. Republicans and Democrats diverge in their reactions to capitalism, big business, socialism and the federal government, with the biggest differences seen on the latter two terms. Sanders' strong challenge to Hillary Clinton for the Democratic nomination is a testament to the fact that his self-labeling as a "Democratic socialist" is not a strong negative among Democrats. His and Clinton's more positive views of the federal government and its role in society as espoused on the campaign trail also seem to fit with those of rank-and-file Democrats, the majority of whom are positive about the government.

It is notable that young Americans constitute the only age group that does not view the term socialism more negatively than capitalism. Older Americans' much more negative reactions to socialism could be based on different historical or conceptual references than is the case for young people. Americans being much more positive about the term free enterprise than capitalism also suggests that labels used to describe an economic system carry different connotations.

Results for this Gallup poll are based on telephone interviews conducted May 2-4, 2016, on the Gallup U.S. Daily survey, with a random sample of 1,544 adults, aged 18 and older, living in all 50 U.S. states and the District of Columbia. For results based on the total sample of national adults, the margin of sampling error is ±4 percentage points at the 95% confidence level. All reported margins of sampling error include computed design effects for weighting. 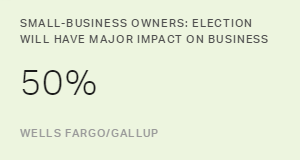