skip to main content
Education
What Students Need to Be Engaged

Logan LaPlante, a Lake Tahoe teen, might be the most engaged student in America. He smiles as he talks about what he's learning. He looks happy, somewhat giddy even, when he describes his school. Maybe that's because he's taught by people who are "stoked to be doing what they're doing." While many kids become psychological dropouts during middle school, Logan is becoming more and more excited about learning and life.

If you talk to him about his education or watch his TEDx video, I think you'll agree that Logan is a poster child for student engagement. However, he is not a product of traditional public schools. When he was nine years old, Logan's mom cobbled together an educational experience -- a process the LaPlantes call "hackschooling" -- that excited him.

Still, after repeatedly viewing his TEDx talk, I was convinced that neither homeschooling nor hackschooling was the key to his enthusiasm for learning. I theorized that, no matter the school, engagement peaks when students feel valued for what they are good at and are inspired by at least one teacher. That's the hypothesis I tested using 2013 Gallup Student Poll data from more than 600,000 students who responded to 20 items, including two I thought might determine the height of student engagement:

My school is committed to building the strengths of each student.

I have at least one teacher who makes me excited about the future. 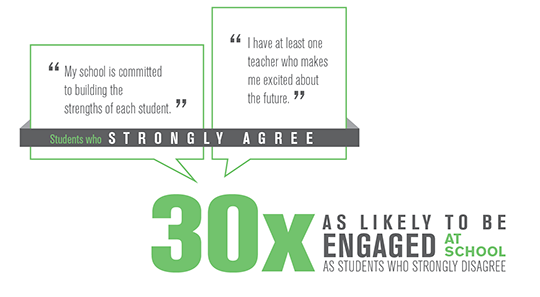 We all know that student engagement is influenced by innumerable factors largely outside a school's control. But this finding suggests that there are some fundamental strategies schools can use to dramatically raise the likelihood that students will be emotionally engaged in the classroom on any given day.

To start, providing students with opportunities to discover and develop their talents should be a core practice in all schools. Imagine how engaged students would be if we devoted as much time and energy to students developing their strengths as we do to test preparation.

Many school districts are demonstrating their commitment to building students' strengths by using tools such as StrengthsExplorer and StrengthsQuest to identify the individual talents of middle and high school students. Other districts, such as Howard County Public Schools in Maryland, want to start earlier in a student's life. This district trains teachers to spot students' strengths and help children pick short-term goals and long-term projects that will keep them excited. This focus on strengths-building is possible because these schools start by helping their teachers and administrators do what they do best.

Additionally, every student deserves to be inspired by at least one teacher. In Gallup's search for the Most Hopeful Teacher in America, we discovered that most schools have at least one teacher who is known for making students excited about the future. These teachers use three strategies:

Forty-five percent of students surveyed through the latest Gallup Student Poll are not engaged in school or are actively disengaged, meaning they are simply going through the motions at best, or actively disrupting teaching and learning at worst. If every kid went to a school committed to building their strengths and each classroom were staffed by a talented teacher who made them excited about the future, poster children for student engagement would be easier to find.