The following is adapted from Gallup's new book, Blind Spot: The Global Rise of Unhappiness and How Leaders Missed It.

Openly telling a pollster that you have the worst life imaginable reveals an awful state of mind, and roughly 8% of the world tells Gallup exactly that. But that is only the percentage of people who rate their lives a zero -- 24% of the world rates their lives a 3 or lower on a scale of zero to 10.

People who rate their lives this low are usually hungry, live in broken communities, struggle on their current income, do not have social networks they can count on, and have no hope for a great job. But the people who are living this kind of life are feeling even worse about it today.

This widespread distrust, coupled with wellbeing inequality, may be causing misery to turn to anger. The anger in this group has increased 50% over the past 15 years (from 24% in 2007 to 36% in 2021).

But should individuals or countries be concerned that people will act on this anger? According to the Global Peace Index, riots, strikes, and anti-government demonstrations increased 244% from 2011 to 2019. And this rise in civil unrest happened before the global pandemic.

In 2020, civil unrest increased exponentially. According to the founder of the Institute for Economics and Peace, Steve Killelea, there were "nearly 15,000 demonstrations globally in 2020, with 5,000 COVID-related incidences." 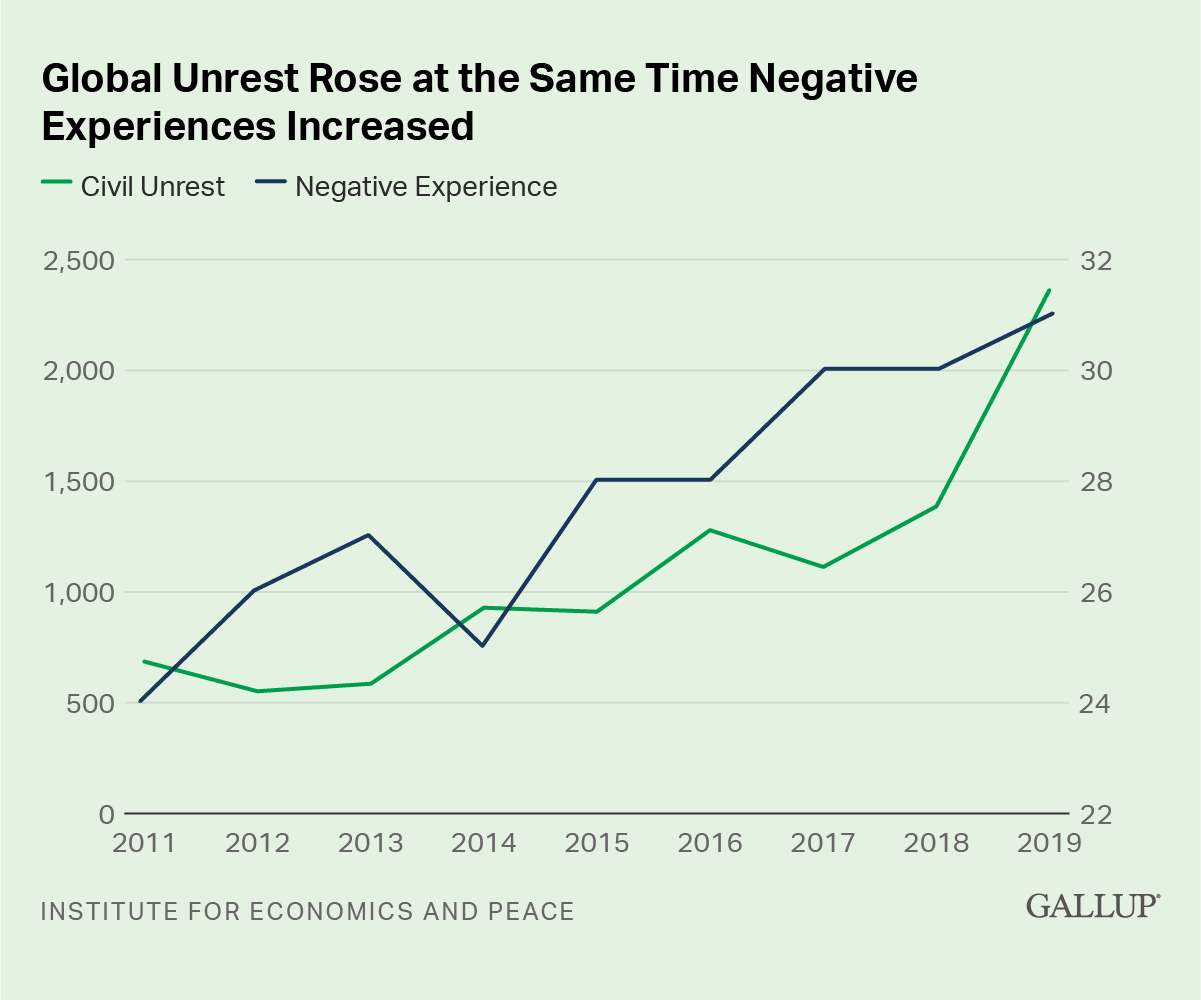 If the increase in negative emotions is causing people to express their frustration in the streets, are they also expressing it at the ballot box?

Behavioral scientist George Ward thinks so. In an unpublished paper, he reviewed Gallup's negative emotions data from Europe to see if they had any relationship to populist attitudes and the success of populist parties. He defined "populist attitudes" by looking at people's opinions toward their government, the media, immigrants, and leaving the European Union (EU).

Ward found that "Negative [emotions] -- both in the form of general sentiment and discrete emotions -- [are] predictive of populist beliefs and voting."

How people feel affects how they act. If there is a relationship between negative emotions and civil unrest or populist attitudes, it should capture the attention of leaders everywhere.

New Book
Blind Spot: The Global Rise of Unhappiness and How Leaders Missed It
Learn about one of the biggest leadership challenges of our time.

A new analysis from Gallup -- published in collaboration with Citi -- offers a novel approach to quantifying the toll that rising temperatures may have on people's wellbeing.