Earlier in the speech, the president ticked off the specific accomplishments of the Affordable Care Act:

Clearly the president believes that the Affordable Care Act has been a resounding success, with quantifiable benefits in these types of very specific areas.
But we just don't see evidence that the American people agree.
In fact, the most important conclusion from our recent analysis of Americans' opinions of the Affordable Care Act is just how stable these attitudes are, and how negative they continue to be. Overall approval of the ACA is now at 41%, while disapproval is at 53%, and that's roughly where it has been for a year. 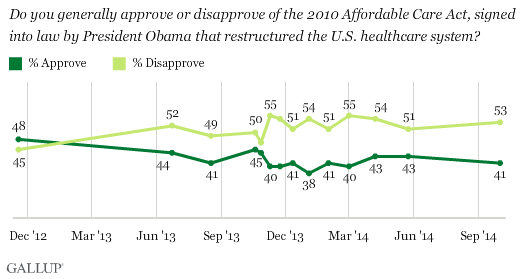 Approval was slightly higher in surveys conducted from November 2012 to last October, including the only poll (November of 2012), which showed approval higher than disapproval. But from last November to the present, approval has vacillated only in a narrow range between 38% and 43%, while disapproval has varied only between 51% and 55%.
Importantly, this encompasses the time period when the healthcare.gov exchanges were open and when the percentage of Americans who are uninsured dropped dramatically -- from as high as 18% in the second quarter of 2013 to 13.4% in each of the most recent two quarters. (Thus, our data clearly show substantiation for Obama's assertion that "we are covering more people.") There was much publicity about this drop in the uninsured. But through it all, attitudes toward the ACA have been essentially frozen in time.
Part of this attitudinal rigidity reflects the irrefutable fact that the Affordable Care Act, as evidenced by its "Obamacare" sobriquet, is a highly politicized piece of legislation. Many Americans both on the left and on the right have essentially knee-jerk reactions to it -- and these reactions aren't subject to a lot of change. Thus, no matter what information may trickle into Americans' consciousness from news coverage of the ACA, it doesn't seem to matter. Attitudes are hardened. In our most recent survey, the approve/disapprove split among Democrats is 73% vs. 23%, while among Republicans the split is 9% vs. 86%. Independents tilt negative at 39% vs. 53%. If we go back to late last year, before the exchanges opened, we find that 71% of Democrats approved and 91% of Republicans disapproved -- very, very similar to the comparable attitudes today. As I indicated, hardened attitudes.
It could be argued that one reason attitudes about the Affordable Care Act are so fixed is that, in reality, the law doesn't directly affect the majority of Americans. But we have seen a steady increase in the percentage of Americans who, in fact, say that it does affect them and their family, increasing from 28% in November 2013 to 43% in this most recent survey. This is one of the few changes that we have measured, suggesting that Americans are not totally unaware that the law is in place and having an effect.
The problem for President Obama and other proponents of the ACA: The increase in the percentage of Americans who say the law has affected them has come both among those who say it has helped them and those who say it has hurt them. In short, Americans are perceiving both negative and positive consequences of the law. To be specific, the percentage who say the law has helped them has gone from 9% in November 2013 to 16% today, while the percentage who say the law has hurt them has gone from 19% last November to 27% today. That's a seven-percentage-point increase in "helped" and an eight-point increase in "hurt". So, the general net negative view of the impact of the law has remained essentially intact, even as the absolute numbers have gone up.
Obama and other ACA proponents would argue that there should be a sharper increase in the percentage who say it has helped them. But we just don't see it in the data.
The majority of those who say the law has hurt them are Republicans, and the majority of those who say it has helped them are Democrats, which leads us to conclude that some of these views on the personal impact of the law may be more political wishful thinking than actual, real world impact. Still, the overall change in the helped/hurt numbers from 2013 have been steady on both sides of the political aisle. Last November, Republicans' ratio of perceived help to hurt was 1% vs. 29%. Today it is 4% vs. 40%. For Democrats, the ratio has gone from 15% helped vs. 8% hurt to 27% vs. 15%.
This basic steadiness of ratios of helped-to-hurt may help explain why the response to the basic approval question has remained constant over the past year, even as more Americans perceive that it is having an impact.
All in all, President Obama clearly has a problem in terms of the public's acceptance of the piece of legislation that is almost certainly destined to go down in history as one of his administration's top accomplishments. He and his allies perceive that the law has been a significant success, helping Americans' healthcare situation in many ways. The American public, so far, doesn't agree.