skip to main content
Blog
Many Filipinos Vulnerable Before Typhoon

Many Filipinos were ill equipped to cope with the devastation of Typhoon Haiyan long before it made landfall. In June, majorities of Filipinos said they struggled to afford food (62%) and adequate housing (55%). Roughly half of the population has consistently reported problems affording food and shelter since Gallup started asking these questions in 2006. 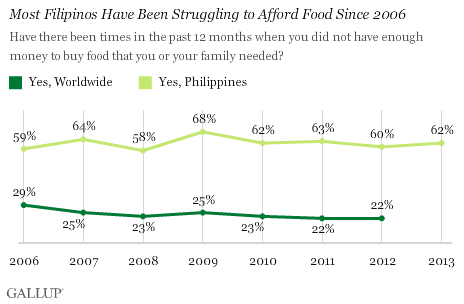 As Typhoon Haiyan -- one of the strongest storms ever recorded -- threatened the central Philippines, I worried. I've visited the islands of Samar, Leyte, and Cebu to oversee interviews for the Gallup World Poll, and many homes were not sturdy enough to withstand the typhoon's horror. They are simple, yet creative and functional dwellings, but are made of non-durable materials such as woven fronds and bamboo. Furthermore, many in the Philippines already lived an emotionally trying existence before the typhoon hit. In 2012, Filipinos were among the most likely worldwide to report feeling a lot of stress (61%), trailing only the Greeks and Syrians. In addition to lacking food and shelter, these high levels of self-reported stress have also consistently been recorded since Gallup began tracking it in 2006, suggesting emotional and physical recovery will take time. 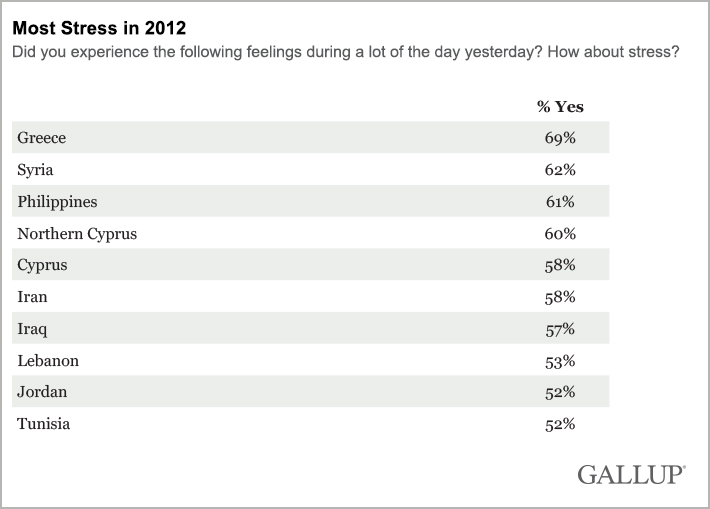 For more global data and insights, sign up for Gallup Analytics and Gallup News alerts.