WASHINGTON, D.C. -- U.S. federal government workers are less engaged than the rest of the U.S. workforce. On average, 27% of federal government employees are engaged in their jobs in 2014, compared with 31% of all other workers in the U.S. With more than 2 million federal employees, this lack of engagement is costing the federal government an estimated $18 billion in lost productivity annually, or approximately $9,000 per employee.

According to Gallup, engaged employees feel a profound connection to their organization and move the organization forward. Not engaged employees may meet expectations of their jobs but do not expend discretionary energy or feel passion for their work. Actively disengaged employees typically are unhappy at work, but more than that, they will actually undermine the progress that their engaged co-workers make.

Those federal government employees who are actively disengaged, combined with those employees who are not engaged, translates into 11% lost productivity across the government, according to a Gallup analysis. This suggests that nearly $9,000 of the average $78,467 federal employee salary is not producing benefits for the agency or the general public.

Gallup determines this estimate of lost productivity by comparing it to a theoretical workplace where all employees are engaged. For obvious reasons, a fully engaged workplace is unlikely to exist, but this estimate also does not take into account other costs of disengaged employees to their employers, such as increased workers' compensations claims, greater turnover, and increased costs for hiring and onboarding new employees.

These lower federal engagement results follow the U.S. Office of Personnel Management's (OPM) recent release of their annual Federal Employee Viewpoint Survey (FEVS) Report that documents federal employee satisfaction. OPM reports that their satisfaction numbers continue to drop and are currently at their lowest levels since 2003. Employee satisfaction means that an employee may have his or her overall needs met but may not have an incentive to excel. Yet employee engagement means that employees have an emotional investment in the organization, looking upon their work as fulfilling a mission. In general, it is more difficult for an organization to achieve true employee engagement as opposed to satisfaction.

These findings are based on more than 68,000 interviews conducted, with U.S. adults aged 18 and older who were employed full time from Jan. 2-Nov. 2, as part of the Gallup-Healthways Well-Being Index.

With the federal government's educated workforce carrying out many different roles and mission-rich responsibilities, it has the potential to be the best place to work in America, or even the world. However, these data suggest the government has not converted these roles and responsibilities into higher engagement.

Low engagement is causing the federal government to lose value from its employees in terms of productivity, arguably more than those in all other work sectors per employee. Gallup research shows that measuring and improving engagement is linked to positive organizational outcomes such as improved retention, higher customer satisfaction and loyalty metrics, increased productivity, fewer safety claims, and minimized absenteeism. For example, Gallup estimates that absenteeism due to low engagement costs U.S. companies approximately $1 billion per year.

The current OPM budget allocates less than $30 million to administer FEVS and direct efforts to improve engagement in the federal government, and individual agencies are probably spending much less than that.

While the size of the government's employee base may be large and diverse, this budget item at these levels is not likely to promote much positive change. If OPM and the rest of the federal government is looking for a simple way to increase federal workers' engagement and reap the benefits of doing so, they could start by managing to employees' strengths, which directly contributes to engagement.

Results are based on telephone interviews conducted Jan. 2-Nov 2., 2014, as part of the Gallup-Healthways Well-Being Index survey, with a random sample of 68,684 adults, aged 18 and older, living in all 50 U.S. states and the District of Columbia. For results based on the total sample of national adults, the margin of sampling error is ±2 percentage points at the 95% confidence level.

Calculating the Productivity Cost of Actively Disengaged and Not Engaged Employees

Gallup developed its estimate of the annual cost of actively disengaged and not engaged employees through a multi-step process.

Step 1: Apply proprietary formula to the Q12 survey results to calculate the number of actively disengaged and not engaged employees within the federal government.

Step 2: Apply widely used published statistical guides (standard utility analysis methods) to the annual average federal salary of $78,467, which yielded a per person cost, spread across all workers, which, multiplied by the total number of workers who are 18 years old or older, producing the first estimate.

Step 5: Multiply the per person gain and the number of workers, resulting in the second estimate. The lower estimate is used in this article.

NOTE: There are no perfect estimates of the cost of actively disengaged and not engaged workers, but these two estimates provide a cost range that is attributable to lost productivity. These cost estimates do not completely account for all other worker outcomes that are related to the engagement of workers, including customer service, safety, turnover, theft, and healthcare costs.

Gallup estimated the annual economic cost of unhealthy days for federal workers and all workers using the following calculation:

Step 1: Multiply the sample proportion of each of the three engagement categories by total population to get the number of engaged, not engaged and actively disengaged employees.

Step 3: Convert the average number of annual unhealthy days into the average number of actual missed work days each year by multiplying each value by 0.31. The 0.31 conversion factor is based on an analysis of workers' responses to this question: "Earlier, you indicated that you had XX days in the last month where poor health prevented you from doing your usual activities. How many actual work days in the last month did you not work due to poor health?"

Step 4: Calculate incremental missed days if worker is not engaged or actively disengaged compared to engaged. 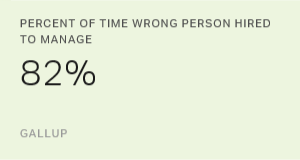 Leadership Mistake: Promoting Based on Tenure

Many employees become managers based on tenure, not talent. The U.S. Department of Defense is considering changing this.