skip to main content
Election 2016
At Least One Candidate Would Be Good President, 66% in U.S. Say

WASHINGTON, D.C. -- Two in three Americans (66%) believe there is at least one presidential candidate in this year's field who would make a good president. This is lower than the percentage who said the same during January of the 2000 (75%) and 2008 (84%) presidential elections -- also races without an incumbent. Republicans may have more presidential candidates to choose from than Democrats, but partisans of the two parties seem equally pleased with the field -- 76% of Republicans and 73% of Democrats say there is a candidate in the mix who would be a good president. Independents are less positive, with 58% expressing a similar opinion.

Both party groups are slightly less content with the field than they were in January 2008, during the last election that featured no incumbent running for another term. Independents see much less potential in this presidential field than they did in the 2008 offering.

Thirty-seven percent of U.S. adults say the presidential campaign is being conducted in a way that makes them feel the electoral process is working as it should. This is about as low as Gallup found in December 2011 (39%), which reflected a decline of nearly 30 percentage points from the previous election. In January 2000 and 2008, majorities (57% and 67%, respectively) said the presidential campaign in each year was being conducted in a way that inspired confidence in the election process. A majority of the country believes this year's presidential field can produce a quality president, but this figure stands below comparable ones for the two most recent open-seat elections in 2000 and, especially, 2008. Neither party holds a distinct edge on this question -- Republicans and Democrats are equally likely to say they could see a 2016 candidate become a good president.

Americans are less positive about how the conduct of the current presidential campaign reflects on the overall electoral system, a continuation of a trend first evinced in late 2011.

Results for this Gallup poll are based on telephone interviews conducted Jan. 15-16, 2016, on the Gallup U.S. Daily survey, with a random sample of 1,017 adults, aged 18 and older, living in all 50 U.S. states and the District of Columbia. For results based on the total sample of national adults, the margin of sampling error is ±3 percentage points at the 95% confidence level. All reported margins of sampling error include computed design effects for weighting. 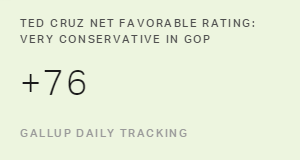 Very conservative Republicans, a politically active bunch, view presidential candidates Ted Cruz, Ben Carson and Mike Huckabee the most positively. Cruz, though, is the only candidate whose image continues to improve with these Republicans. 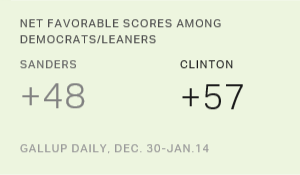 Though Bernie Sanders' net favorability has reached a new high among Democrats, Hillary Clinton maintains a double-digit lead over Sanders as the candidates prepare for their final debate before the Iowa caucuses.