PRINCETON, N.J. -- During a year marked by numerous college protests over race and diversity issues, presidents of U.S. colleges and universities describe race relations on their own campus positively, and no worse than they did in 2015. However, their broader perceptions of race relations on campuses nationwide are significantly worse than a year ago. Currently, just 24% of presidents rate race relations on U.S. campuses as either excellent or good, down sharply from 43% in 2015.

These results are based on the Inside Higher Ed annual survey of U.S. college presidents, conducted by Gallup.

Protests about the treatment of racial and ethnic minority students erupted last fall on a number of college campuses, including the University of Missouri, Yale University, Princeton University and Ithaca College. Student concerns ultimately led to the resignation of the president of the Missouri state university system and the chancellor of the main campus in Columbia. The president of Ithaca College also resigned under student and faculty pressure for his handling of race matters on that campus.

These protests received widespread media attention and likely contribute to presidents' more negative assessment this year -- fewer than one in four presidents now say race relations are "excellent" or "good" on campuses across the country. The majority of presidents, 65%, describe race relations on U.S. campuses as "fair," and 10% say they are "poor." The latter figure is up from 5% a year ago.

These findings could indicate that a few highly publicized incidents of racial tensions on campuses have had a dramatic influence on the way presidents perceive the state of race relations at most U.S. colleges and that racial strife is not the norm at colleges. College presidents' more positive assessments of race relations on their own campus, compared with campuses nationally, may also reflect individuals' tendency to rate their own situation more positively than the situation in the country as a whole.

Blacks are more than twice as likely as whites to say the racial climate on their campus is poor (13% vs. 5%, respectively).

Students' views of the quality of race relations on campus are related to their perceptions of how racially and ethnically diverse they perceive the student body to be. While 87% of those who believe their campus is "highly diverse" rate the racial climate positively, 34% of those who say their campus is "not diverse at all" do.

College students were not asked to rate the racial climate on colleges nationwide.

Both presidents and students at U.S. colleges and universities assess the racial climate on their campuses positively. And presidents see the situation as no worse than a year ago, even though a wave of college protests on racial matters is likely contributing to their considerably more negative assessment of race relations on campuses nationwide.

While the poll results paint a generally positive picture of race relations on campus, they do show that there is still progress to be made, given that about one in six presidents and about one in four students rate the racial climate at their college as fair or poor.

Results for college presidents are based on Web interviews conducted Jan. 7-Feb. 2, 2016, with 727 presidents of U.S. colleges and universities with student enrollment greater than 500 students. The sampling frame for the study was the universe of 3,046 presidents of colleges with greater than 500 students, with weighting adjustments made to correct for nonresponse using institutional characteristics (region of the country, private versus public control, two-year or four-year degree-granting, and student enrollment size. The weighted sample results can be viewed as representative of the views of presidents at colleges nationwide.

Results for college students are based on telephone interviews conducted Feb. 29-March 15, 2016, with a random sample of 3,072 U.S. college students, aged 18 to 24, who are currently enrolled full time at four-year institutions. The college sample consists of a random subset of full-time students at 32 randomly selected U.S. four-year colleges that were stratified based on region, enrollment size and private versus public control. For results based on the total sample of college students, the margin of sampling error is ±3 percentage points at the 95% confidence level. All reported margins of sampling error include computed design effects for weighting. 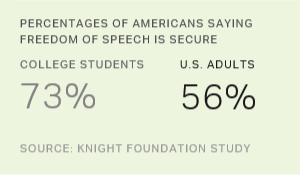 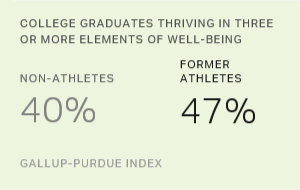