And in the only area in which they are not leading non-student-athletes, financial well-being, former student-athletes are just as likely to be thriving.

These results are among those featured in a new report, Understanding Life Outcomes of Former NCAA Student-Athletes. The findings are based on the national Gallup-Purdue Index, a comprehensive, nationally representative study of U.S. college graduates with Internet access. Gallup conducted the study Feb. 4-March 7, 2014, with nearly 30,000 U.S. adults who had completed at least a bachelor's degree. As part of this study, Gallup interviewed 1,670 former NCAA student-athletes about their lives and compared their responses with a cohort of 22,813 non-student-athletes who graduated from the same institutions. Well-being is not only about being happy or financially well off, nor is it solely synonymous with physical health. Rather, it is about the interaction and interdependency among many aspects of life, such as finding fulfillment in daily work, having strong social relationships and access to the resources people need, feeling financially secure, being physically healthy and taking part in a true community.

The results from this study suggest that in many of these areas, substantial percentages of former NCAA student-athletes are finding success after they leave the playing field. It's entirely possible that former student-athletes possess an innate drive before college that leads them to compete at the highest levels of athletic competition and that this same drive spurs them to succeed in the classroom, the workplace and later in life. But there are certainly many aspects of being a student-athlete that encourage success in work and life -- elements of learning effective teamwork, extreme dedication and focus, building resiliency from losses and setbacks, thriving under pressure and benefiting from mentoring from teammates and coaches.

Results for the Gallup-Purdue Index, which the study used for comparison purposes, are based on Web surveys conducted Feb. 4-March 7, 2014, with a random sample of 29,560 respondents with a bachelor's degree, aged 18 and older, with Internet access, living in all 50 U.S. states and the District of Columbia. These respondents included 1,670 former NCAA student-athletes.

Gallup-Purdue Index interviews are conducted via the Web, in English only. Samples are weighted to correct for unequal selection probability and nonresponse. The data are weighted to match national demographics of gender, age, race, Hispanic ethnicity, education and region. Demographic weighting targets are based on the most recent Current Population Survey figures for the aged 18 and older U.S. bachelor's degree population.

All reported margins of sampling error for the Gallup-Purdue Index of all college graduates include computed design effects for weighting.

For results based on the total sample of those with a bachelor's degree who graduated in 1970 or after, the margin of sampling error is ±1.3 percentage points at the 95% confidence level.

Gallup constructed a Generalized Linear Model (GLM) to study the differences between the college experiences of former student-athletes and non-student-athletes. To account for differences in the demographic characteristics of the two groups, the GLM accounts for age, gender, race and the education level of both parents of the graduate. Graduates are generally compared based on their combined responses of "agree" and "strongly agree," the two highest points available on a five-point Likert scale. 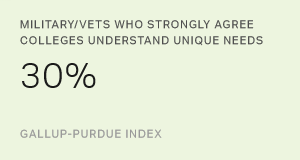 U.S. college graduates who served in the military while enrolled in college are more likely to strongly agree that their college or university understood their unique needs than those who served prior to enrolling in college. 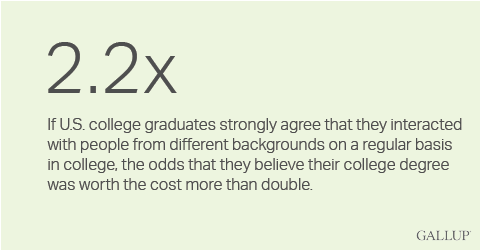 Recent U.S. college graduates who interacted with people from different backgrounds on a regular basis during their undergraduate experience are more likely to believe their college degree was worth the cost.