WASHINGTON, D.C. -- Americans' satisfaction with the way things are going in the U.S. dropped 12 percentage points in the past month, amid high-profile police killings of black men and mass shootings of police. Currently, 17% of Americans are satisfied with the state of affairs in the U.S. Satisfaction is the lowest it has been nationwide since October 2013, when Republican members in Congress led a federal government shutdown. For the past two years, satisfaction has been in the 20s and 30s, with low points of 20% in December 2015 and November 2014.

These data are from Gallup's latest monthly reading of Americans' satisfaction, taken July 13-17. Between the June reading and now, the U.S. has been rocked by deadly shootings of black men by police in Louisiana and Minnesota, and the targeted killing of police at a protest in Dallas. Also since the last survey, a gunman killed 49 people in a gay nightclub in Orlando. World news has not offered much solace, with a terrorist attack across the Atlantic in Nice, France, involving a truck ramming into a crowd on Bastille Day in mid-July, killing 84.

Race Relations Named as Most Important Problem in U.S.

The same July poll finds a surge in concern about race relations and racism, after the several recent incidents of violence between police and black men. In the July 13-17 update, 18% of Americans say race relations or racism is the most important problem facing the nation, a jump of 13 points in the past month.

There was little change in Americans' mention of terrorism this month, despite the Orlando shootings.

Dissatisfaction with government ranks second among the most important problems this month, and at 16% generally remains in the range it has been in during recent months. Mentions of the "economy in general," No. 1 last month, fell to third at 12%. Americans this month are more likely to mention crime/violence (6%) and guns/gun control (5%) than they have been in previous months, most likely a reaction to the occurrence of violence and shootings in Louisiana, Minnesota, Texas and Florida.

The decline in Americans' satisfaction this month includes a particularly sharp drop among Democrats, whose satisfaction levels -- after registering 51% last month -- dropped 22 points to 29% in July. This was a marked change from the 11-point jump in satisfaction Democrats expressed from May to June. Republicans, on the other hand, have professed extremely low satisfaction with life in the U.S. throughout the Obama administration, ranging from 3% to 19% during Barack Obama's term in office. Independents' satisfaction dropped in the last month from 24% to 16%.

Racial strife, epitomized in the recent police shootings and shootings of police, and highlighted in ongoing protests, appears to have ignited new concerns about the state of the U.S. The American public now says race relations/racism is the nation's single most important problem, and overall satisfaction with the way things are going in the country has dropped significantly.

As the summer continues, with political conventions and the possibility of ongoing racial unrest, satisfaction with the U.S. may remain low as uncertainty persists at least until the presidential election in November. 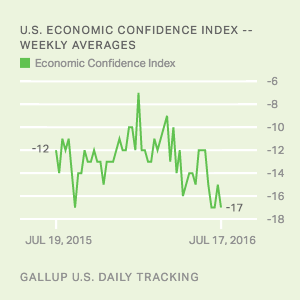 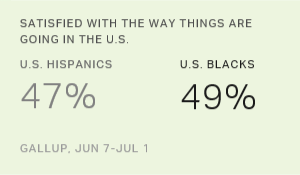 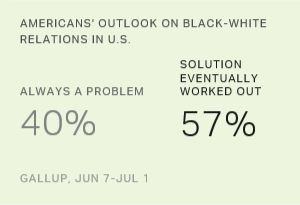