WASHINGTON, D.C. -- Republican presidential nominee Donald Trump frequently accuses the media of biasing its coverage of the 2016 election campaign in favor of his Democratic opponent Hillary Clinton. A majority of registered voters (52%) agree with the Republican nominee. Meanwhile, 8% think the media favors Trump and 38% perceive no media bias.

Therefore, not only do the slight majority of U.S. registered voters believe the media is biased in favor of Clinton, but 87% of voters who perceive any media bias believe that bias favors Clinton.

The findings are based on Gallup Daily tracking data collected Oct. 27-28, 2016. About half of respondents were interviewed prior to the Friday release of a letter from FBI Director James Comey to Congress about the discovery of additional emails that might pertain to the FBI's investigation into Clinton's use of a private email server while she was secretary of state. Perceptions of media bias did not differ significantly between the two days.

Americans' perception of media bias is stronger in this election than during the 2004 presidential campaign, the only other time Gallup has asked the question. In October of that election year, 45% of registered voters believed there was no media bias, seven percentage points higher than today. Further, there was a bit more parity in perceptions of which party benefited from media favoritism, with 35% saying it was biased in favor of Democrat John Kerry and 16% in favor of Republican George W. Bush.

Among registered voters who perceived media bias, 69% thought that the bias favored Kerry in 2004, 18 points lower than the perceived bias favoring Clinton in 2016.

Opinions About Candidates Strongly Linked to Perceptions of Media Bias

Voters' perceptions of media bias in 2016 are closely related to their underlying opinions of Clinton and Trump. Among voters who have a favorable opinion of Trump, 90% say that the media is biased in favor of Clinton. By contrast, nearly two-thirds (63%) of those who view Clinton favorably say the media is not biased toward either candidate. Notably, more of these Clinton supporters believe the media is biased toward her over Trump, 23% vs. 13%, respectively.

Voters' perceptions of media bias in 2016 are also related to political party affiliation. Majorities of Democrats (63%) and independents (52%) do not believe that the media is biased toward either candidate. By contrast, the vast majority of Republicans (86%) perceive media bias, and nearly all of them (80%) believe the bias favors Clinton. Among independents and Democrats who perceive bias, large majorities also believe the bias favors Clinton.

Similar to today, a majority of Democrats (51%) and independents (72%) did not perceive media bias in 2004. But the perception of bias has grown substantially among Republicans, increasing by 26 points from 60% in 2004 to 86% today.

In the U.S., perceptions of a liberal media bias have been prevalent throughout this century. However, the perceived tilt in bias toward the Democratic candidate among registered voters was less pronounced in the 2004 election than it is today.

The overall percentage believing the media is biased toward either candidate is nine points higher today than in 2004, 60% vs. 51%, respectively. But among those who perceive bias, almost all in 2016 (87%) see Clinton as the beneficiary versus 69% saying Kerry benefited in 2004. The increased perception of media bias among voters is largely driven by Republicans. While they were more likely than independents and Democrats to perceive bias in 2004 and are again more likely to do so in 2016, that gap has widened substantially.

This shift could be related to how often Trump publicly laments media bias in favor of Clinton and has perhaps elevated the issue to a higher profile in this campaign than in past elections.

Despite evidence of the partisanship in patterns of media-bias perception, Americans who perceive bias -- regardless of their favorability of Clinton or Trump or their party affiliation -- generally agree that media coverage favors Clinton.

Results regarding media bias in the 2016 campaign are based on telephone interviews conducted Oct. 27-28, 2016, on the Gallup U.S. Daily survey, with a random sample of 1,017 adults, aged 18 and older, living in all 50 U.S. states and the District of Columbia. Of this group, 940 respondents identified as registered voters. For results based on registered voters, the margin of sampling error is ±4 percentage points at the 95% confidence level. Margins of error within subpopulations of both groups are higher and vary depending on sample size. All reported margins of sampling error include computed design effects for weighting. 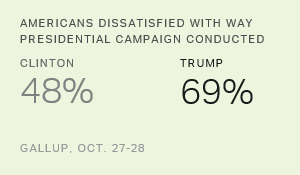