skip to main content
Politics
Trump Favorability Up, but Trails Other Presidents-Elect

PRINCETON, N.J. -- Donald Trump's favorable rating has improved from 34% to 42% after his election as president. While a majority in the U.S. still have an unfavorable view of him, his image is the best it has been since March 2011 when 43% viewed him positively. Gallup measured opinions of Trump infrequently from 1999 through 2015, and then on a continuous basis from June 2015 through the election. Americans have consistently viewed Trump more negatively than positively. The sole exception in Gallup's trend came in 2005, when Trump's reality show The Apprentice was among the most popular TV programs. At that time, 50% of Americans had a favorable opinion of Trump and 38% an unfavorable one.

Trump's favorability ratings have increased among all political party groups since the election. Republicans have shown the greatest increase -- 11 percentage points -- to 82%. Thirty-nine percent of independents, up from 32%, and 10% of Democrats, up from 5%, view Trump positively.

Other Presidents-Elect Viewed Much More Positively

Gallup has asked Americans to rate political figures using the current favorable/unfavorable format since 1992. The last three presidents-elect had much higher favorable ratings at comparable time periods than Trump currently does. Then President-elect Barack Obama had the highest favorable rating, 68%, in November 2008. Fifty-nine percent of Americans viewed George W. Bush positively just after the Supreme Court effectively decided the 2000 election in his favor in December of that year. Bill Clinton's favorable ratings were also just shy of 60% after he won the 1992 election.

Trump's ratings lag behind those of other presidents-elect in large part because Democrats' views of him are much worse than the opposition party's supporters' ratings have been in the past. Whereas 10% of Democrats view Trump favorably, 25% of Republicans had a positive opinion of Clinton, 31% of Democrats had a positive opinion of Bush and 35% of Republicans viewed Obama favorably.

And Trump's 82% favorability among his party's supporters also is lower than that for prior presidents-elect, which range from 88% for Clinton to 95% for Obama.

Trump, like his predecessors, will have to govern a nation that is divided politically. But Trump's challenge may be even greater, because the nation is arguably more divided than when his predecessors took office, perhaps as evidenced by several days of protests nationwide after his election. Trump also has far less public goodwill than Obama, Bush and Clinton did after they were elected. He won the election despite a historically low favorability rating and is the first candidate to win with a lower favorable rating than his opponent.

However, Trump's favorability is improving. His inauguration may provide an additional boost in popularity, and all prior presidents have enjoyed a "honeymoon period" in the initial months of their presidency. But with so much ground to make up in public support, and a difficult presidential transition for a political newcomer to navigate, Trump may very well start his term with the lowest job approval ratings for any president. 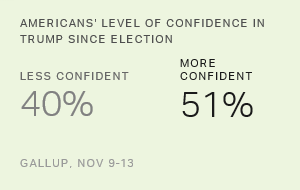 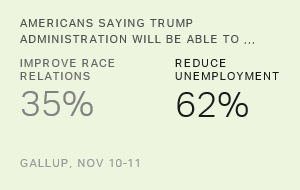 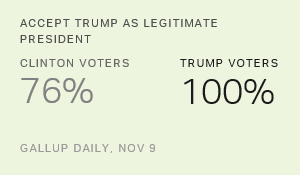