Gallup has measured Americans' confidence in public schools since 1986. Confidence hit its lowest point in 2014, when about one in four U.S. adults (26%) expressed confidence in the nation's public schools. This low was nearly half the high mark of 50% in 1987.

In the first three years that Gallup measured views of public schools, about half of Americans expressed confidence. But significant dips in 1989 and in 1991 suggested that confidence would not quickly return to the high levels initially measured. From 1995 through 2006, the confidence rating for public schools remained fairly stable, hovering near 40%. From 2007 to 2014, with the exception of a significant bump in 2009 -- the year that many states committed to the development of the Common Core State Standards -- and a smaller uptick in 2013, confidence declined incrementally. The 11-point spread between Democrats and Republicans is much smaller than the 23-point gap in partisan confidence in "colleges and universities" measured in a separate poll in August. The wider party gap in ratings of higher education appears to reflect Republicans' perception that a liberal political agenda is driving what is taught in colleges -- a perception that apparently has not spread to their views of public schools.

This year's bump in confidence in public schools parallels the increase in Americans' satisfaction with public school education as measured in Gallup's annual Work and Education survey, conducted in August. Nearly half of U.S. adults (47%) say they are "completely" or "somewhat" satisfied with the quality of education for K-12 students, up four percentage points from 2016 but still trailing the high mark for satisfaction (53%) that occurred in 2004. While U.S. public schools have struggled to boost their national image in the past decade, there is a hint of progress. The six-point improvement in confidence in public schools from 2016 to 2017 matches the largest year-over-year positive change for schools in Gallup's trend.

Some recent education successes may be helping to nudge confidence in schools upward. The Every Student Succeeds Act, a bipartisan measure signed by President Barack Obama in December 2015, provides increased autonomy and flexibility for state and local education agencies to steer innovation and accountability measures -- and Gallup research suggests that Americans are more trusting of local than federal government. Additionally, the U.S. graduation rate is now at an all-time high of 83%, and the dropout rate is down.

Gallup research shows the nation's public school leaders are likewise optimistic about their school systems. A recent poll of U.S. superintendents shows a significant majority (85%) are excited about their district's future. However, there is clearly more work to be done to improve the quality of education and how it is perceived. Just 32% of these school leaders say they are excited about the future of U.S. education generally -- a percentage that aligns closely with the 36% of Americans expressing confidence in the nation's public schools.

Learn what public school leaders can do to increase confidence in their local school districts. 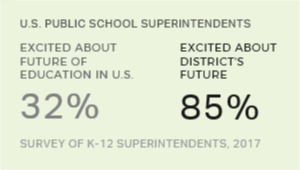