WASHINGTON, D.C. -- Americans are split on how much President Donald Trump is responsible for improvements in the U.S. economy over the past year, with 49% crediting him at least a moderate amount, and 50% crediting him not much or not at all. The public is slightly more likely to give Trump's predecessor, Barack Obama, credit -- 56% say he deserves a great deal or a moderate amount versus 41% not much or none at all.

Trump has boasted in tweets over the past several months about record growth in the stock market, declining unemployment and robust gross domestic product growth. Critics of the president have countered that positive economic developments were already occurring during Obama's presidency and are the result of Obama's economic policies. Given these countervailing narratives, the current question asks Americans how much credit for economic improvements they give to Trump and how much they give to Obama.

Most Americans tend to favor either Obama or Trump when giving credit for economic improvement. Only 17% say both men deserve at least a moderate amount of credit, while another 10% say neither does. The vast majority either give Obama credit but not Trump (39%) or give Trump credit but not Obama (31%).

Those most likely to give credit to Obama include young adults, women and those with annual household incomes under $36,000. Those groups are also among the least likely to credit Trump.

Less than two years ago, when Gallup's Economic Confidence Index was at -16 -- reflecting the public's negative perceptions of economic conditions -- Gallup asked Americans how much they blamed Obama and his predecessor George W. Bush for the economy. Americans at that time were more likely to blame Bush than Obama.

A steady diet of positive economic news since then has changed Americans' perspectives, moving the Economic Confidence Index into positive territory with a reading of +6 for 2017. The question now has become how much credit to give the current president, many of whose economic policies have not gone into effect or have not been in effect very long, and how much to give to the man he succeeded.

For now, Americans are less likely to give Trump credit (though almost half do) than to give it to Obama. In these times of expanding partisanship, it is unclear whether Democrats will be more willing to credit Trump if the good economic news continues; it is just as unclear whether Republicans will be less likely to consider him responsible if the good news turns bad.

Results for this Gallup poll are based on telephone interviews conducted Jan. 8-14, 2018, on the Gallup U.S. Poll survey, with a random sample of 1,499 adults, aged 18 and older, living in all 50 U.S. states and the District of Columbia. For results based on the total sample of national adults, the margin of sampling error is ±3 percentage points at the 95% confidence level. All reported margins of sampling error include computed design effects for weighting. 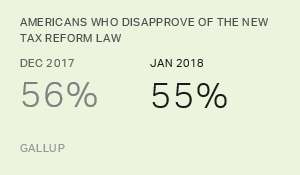 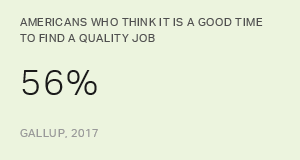