WASHINGTON, D.C. -- U.S. K-12 teachers believe their input needs to carry more weight when important decisions are being made at the school level. Currently, 31% of teachers believe their input is considered "a great deal" or "a lot" in these situations, much lower than the percentages saying the same about input from other stakeholders -- including school administration, the local school board, and state and federal governments.

These results are from a nationally representative Gallup Panel survey of nearly 500 teachers who teach kindergarten through high school at public, parochial, private and other schools across the U.S., conducted March 5-12, 2018.

Classroom teachers' belief that their voices are not heard in decision-making processes is not new. A 2012 Gallup survey of employees in 12 different occupational categories found that K-12 teachers were the least likely of all groups to agree with the statement "At work, my opinions seem to count."

In addition to asking teachers how much input they currently have in decision-making at their school, teachers were asked how much input they should have. The results show that teachers clearly believe they need a stronger voice where they work. Nearly all teachers, 93%, believe they should have considerable input, including 52% saying "a great deal" -- substantially exceeding the percentages saying other stakeholders should have similar levels of input on important decisions. Teachers are nine percentage points more likely to say they should have considerable input than to say the same about the next highest group, school administration, at 84%.

Teachers' belief that they should have more influence than they do currently is accompanied by their widely held view that state and federal governments currently have too much influence.

Nearly two-thirds of teachers (65%) say their state government currently has a lot or a great deal of input in how decisions are made, yet just 19% believe it should have that much input.

Teachers also appear to be in sync with the attitudes of the broader public in their preference for local decision-making in school issues. Americans strongly prefer having local input rather than state or federal input in decision-making. When asked who should decide what is taught in public schools, local school boards received a higher percentage of affirmative responses than state and federal governments combined.

Education policy decisions on curriculum, testing, school funding, school choice and safety are often contentious. Teachers feel that governing bodies, especially at the state and federal levels, have had too prominent a voice in important decisions -- and believe that they themselves should have much more input in decision-making.

Teachers' employee engagement is about the same as overall employee engagement in the U.S., but there are clear opportunities for improving it. K-12 teachers lag other professionals in their belief that their opinions count at work, and this could be undermining their broader engagement as public school employees. Giving teachers more opportunities to register their views could address this deficit and boost overall engagement within the profession. In turn, this could lead to better collaboration among education stakeholders as public schools work through important issues -- and it may ultimately improve student engagement in the classroom as well.

Results for this Gallup Panel survey are based on interviews conducted via a web survey March 5-12, 2018, with 497 U.S. teachers who teach kindergarten through high school. The teachers are members of Gallup's probability-based national panel. For results based on the total sample, the margin of sampling error is ±7 percentage points at the 95% confidence level. All reported margins of sampling error include computed design effects for weighting. 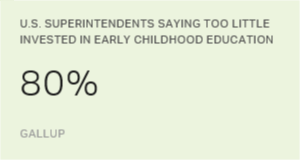 Most U.S. public school superintendents (80%) say their state spends too little on early childhood care, while 77% say these programs have a great deal of impact on student success. 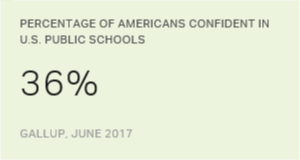 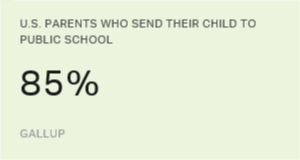