WASHINGTON, D.C. -- A review of Americans' ratings of President Donald Trump across a series of personal dimensions shows that at least half consider him intelligent, strong and decisive, and able to bring about change. However, much smaller proportions deem him honest, likable or admirable, or say he has appointed good advisers or works well with both parties.

Americans' ratings of Trump for keeping his promises, understanding complex issues, putting the country's interests above his own, caring about average people and managing government are roughly comparable to his overall job approval rating, and thus neither above nor below what would be expected.

These views of the president are based on Gallup interviewing conducted June 1-13.

The 58% of Americans who consider Trump intelligent likely agree with his own self-perception, as evidenced by his terming himself "really smart" and "a very stable genius" in response to concerns about his temperament and intelligence. This "intelligent" dimension has not been asked frequently enough to provide clear historical context, but when asked in a different format, Bill Clinton and George H.W. Bush scored higher on a similar question in the early 1990s.

Trump's above-average score on being strong and decisive fits with his "take no prisoners" approach to policy and his public pronouncements and tweets. Likewise, Trump's higher-than-average ratings for being able to "bring about the changes this country needs" correspond to his clear desire to make radical changes in policy and the way things are done in Washington.

Trump's below-average score on picking good advisers may be related to the unusually high turnover of advisers and Cabinet members in the Trump administration, as well as the number of his aides and associates who have been embroiled in controversies and scandals. Trump himself often derides his own Cabinet members.

Media "fact checkers" have shown that Trump has issued misleading or false statements at a higher rate than his predecessors, and Gallup polling shows that his positive ratings "as a person" are nine percentage points lower than his overall job approval rating.

Additionally, the discord between Trump and Democratic and some Republican leaders in Congress has been evident since he first took office. These contentious relationships fit with the public's giving the president his lowest rating on the "works well with both parties" dimension. This perceived inability to get along with Congress, of course, is not a new presidential phenomenon; Barack Obama received a 40% rating on this characteristic in 2013, at a time when his overall approval rating was 48%.

Trump's presidency is still young compared with the eight years in office for each of his three predecessors -- Obama, George W. Bush and Clinton -- so it is too early to begin to compare the trajectory of his image with those of these presidents. Over the short time he has been in office so far, however, Trump's image across these dimensions has remained fairly stable, with a few exceptions.

There has been little change in Americans' views of Trump on the other dimensions tested over time, including his ability to manage the government effectively, his honesty and trustworthiness, caring about the needs of people, and putting the country's interests ahead of his own political interests.

It would not be unexpected to see more changes in Trump's ratings on these characteristics in the years ahead. The character ratings of Obama, Bush and Clinton all changed significantly over time as each went through his eight years in office, shaped by outside events and what was happening in the White House.

For example, Clinton's rating as being honest and trustworthy fell dramatically in his second term as the Monica Lewinsky scandal almost consumed his presidency, reaching as low as 21% in the summer of 2000.

George W. Bush's ratings on almost all dimensions soared as part of the rally effect that followed the 9/11 terrorist attacks but then cratered in his second term as his job approval ratings fell to the 30% range.

Obama's character ratings followed a similar pattern, with positive views in his first year in office during his honeymoon period and much lower ratings on most personal dimensions in subsequent years, when his job approval ratings held mostly in the 40% range.

Complete trend data for dimensions on which Trump has been measured more than once are at the end of this article.

As would be expected, Republicans and independents who lean Republican are much more likely to associate each dimension with Trump than is the case for Democrats and Democratic leaners.

Overall, both Republicans and Democrats give Trump the highest marks for being intelligent. Republicans are least positive about Trump's ability to deal with both parties in Washington -- just 53% say this applies to Trump, the only dimension with less than 60% agreement among Republicans. In contrast, only 30% of Democrats say Trump is intelligent, his highest rating among that group. On nine of the 13 characteristics, less than 20% of Democrats believe it applies to Trump.

Given a chance to rate Trump across a series of personal characteristics, the American public scores him highest on his intelligence, being strong and decisive, and bringing about needed changes. He does much less well in terms of likability, his choice of advisers, and his ability to work with both parties in Washington.

These views may be partly what Trump himself would expect. His bombastic, highly critical and often negative pronouncements and tweets underscore that his administration is not focused on making friends and being nice to those with whom he deals. And he certainly would personally tend to agree that his objective is to produce change and shake things up in Washington.

One problem for Trump is highlighted by previous Gallup research showing that the type of "softer" dimensions on which Trump does least well are exactly those most related to Americans' overall evaluations of him. This may help explain why Trump's job approval rating, despite a very positive economy, has yet to get near the majority level. 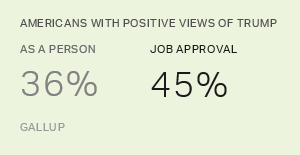 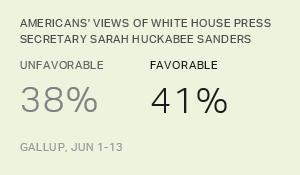 Americans view White House Press Secretary Sarah Huckabee Sanders about equally favorably (41%) as unfavorably (38%) -- while a sizable minority (21%) have no opinion of her. 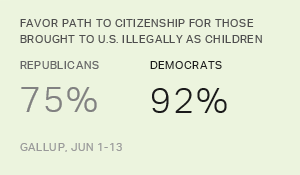