WASHINGTON, D.C. -- Although technically a competitive or "purple" state in terms of how it voted in the past two presidential elections, Texas is more closely aligned with "red" -- that is, strongly Republican -- states when it comes to its residents' views on abortion.

According to aggregated Gallup data from its 2011-2021 Values and Beliefs polls, 26% of Texans believe abortion should be illegal in all circumstances, similar to the 25% saying this, on average, across all red states and 21% in purple states. It significantly exceeds the 14% holding this strong anti-abortion view in "blue" (that is, strongly Democratic) states. 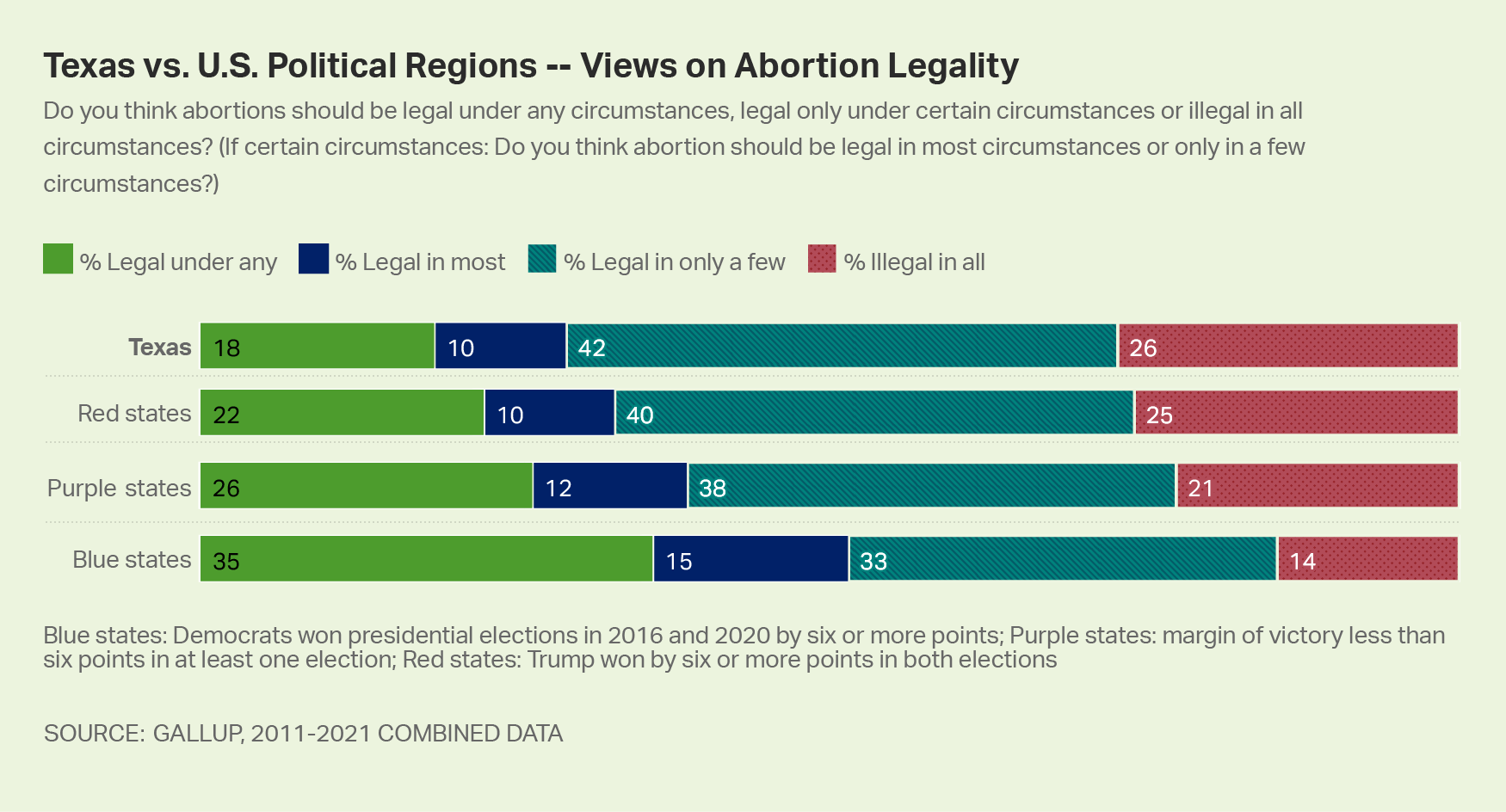 At the opposite end of the spectrum, 18% of Texans and 22% of red state residents believe abortion should be legal under any circumstances. This contrasts with 26% of those in purple states and 35% in blue states.

For this analysis, Gallup defines red states as those that Republican Donald Trump won in both 2016 and 2020 by at least six percentage points. Blue states are those that the Democratic candidate won in both 2016 (Hillary Clinton) and 2020 (Joe Biden) by at least six points. Purple states are those where the margin of victory was less than six points in one or both presidential elections. Texas qualifies as a purple state by virtue of its 5.6-point margin in support of Trump in the 2020 election. Trump won Texas by a nine-point margin in 2016.

When asked to describe their overall position on abortion, slightly more than half of Texans (54%) identify themselves as "pro-life" and 39% identify as "pro-choice." Again, these attitudes are essentially the same as those for adults living in red states.

In blue states, the majority identify as pro-choice, while purple states have equal proportions of pro-choice and pro-life identifiers.

Texas has become a flashpoint in the abortion debate since it adopted a law in May that prohibits abortion after a fetal heartbeat is detected, which can be as early as six weeks after gestation. The law went into effect recently, and the U.S. Supreme Court declined to block its implementation.

Although the law was written in a way to avoid violating Roe v. Wade and other legal precedents, it effectively goes against the tenets of Roe that guarantee women unrestricted access to abortion in the first trimester. In May, Gallup found 58% of U.S. adults opposed to overturning Roe v. Wade and 32% in favor of doing so. Those attitudes are typical of what Gallup has measured on the issue since the late 1980s.

The data provided in this report are intended to put Texans' broad views on abortion in national context and are not meant to indicate how Texas residents view the state's new abortion law.

Results for this Gallup poll are based on combined telephone interviews conducted across 11 polls from 2011 to 2021, encompassing interviews with 11,742 adults, aged 18 and older, living in all 50 U.S. states and the District of Columbia. The Texas results were weighted separately to ensure they are representative of the state’s adult population on the basis of gender, age, race/ethnicity and education.

For results based on the total sample of 855 Texas residents, the margin of sampling error is ±4 percentage points at the 95% confidence level. All reported margins of sampling error include computed design effects for weighting.