Daylight saving time has had a storied history in the U.S. dating back to World War I, when it was first employed. The federal government has modified the laws about daylight saving time periodically, and most recently, the U.S. Senate this month voted to make it a year-round practice. Gallup polling on the issue shows that the American public's views have been nuanced and influenced by the events of the day.

Gallup periodically assessed the U.S. public's support of the overall concept six times between 1937 and 1999 and found at least a slim majority consistently favoring the practice. However, the question did not measure whether people preferred that it be permanent. 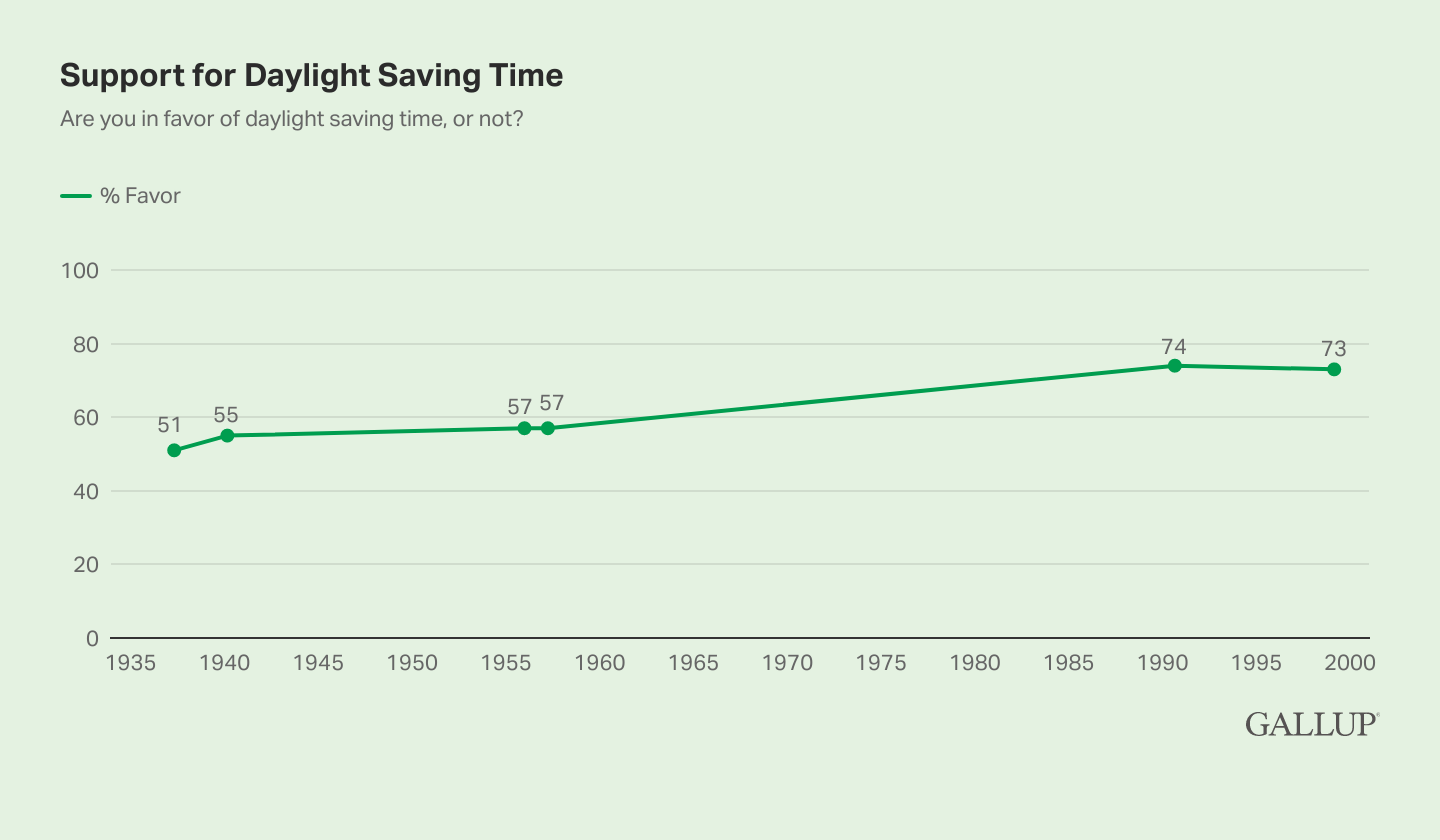 In 1918, the U.S. followed several European nations in adopting a year-round, one-hour time shift aimed at conserving fuel and extending the workday for war industries and factory workers. After the war, while some parts of the U.S. continued the practice, the national time change that had been established by the 1918 Standard Time Act was repealed, and permanent standard time remained in effect nationally until 1942.

In September 1941, roughly three months before the U.S. entered World War II, Gallup asked Americans if they favored instituting year-round daylight saving time. The slight majority, 53%, did not support it, while 36% did. However, three months later, after the Japanese bombing of Pearl Harbor resulted in the U.S. declaration of war, 57% supported having yearlong daylight saving time "as long as the war lasts."

Early in 1942, President Franklin D. Roosevelt reestablished year-round national daylight saving time -- "war time," as the president dubbed it -- aimed at promoting national security and defense. However, when the war ended in 1945, states were free to adopt their own daylight saving time practices. This resulted in a piecemeal approach that lasted more than two decades and proved confusing at times, particularly for broadcast and transportation systems.

Gallup polling in 1946 and 1947 found no consensus among Americans, as fewer than one in five supported year-round daylight saving time; about one-third preferred that it be only in the summer; and just under half favored standard time all year long.

Dr. George Gallup pointed out that farmers were staunchly opposed to daylight saving time, while urbanites broadly favored it. In 1947, Dr. Gallup wrote, "Few issues divide city folk and farm folk as sharply as the question of the time change. The majority of city people like the long evenings of daylight which daylight time provides. But farmers claim that the routine of farm life gets all snarled up if somebody tampers with the clocks -- that the dew on the grass won't dry any earlier in the morning and the cows can't get used to being milked an hour earlier."

The Next Energy-Induced Campaign for Daylight Saving Time

In 1966, after more than 20 years without a national standard for time, Congress passed the Uniform Time Act, and daylight saving time was standardized in the U.S. for part of the year.

However, in late 1973, to cut fuel consumption during the energy crisis, President Richard Nixon signed a law instituting year-round daylight saving time. Shortly before the bill's passage, 57% of Americans supported the concept as a means to help deal with the energy situation.

Yet, the law quickly became widely unpopular as the public began to experience early-morning darkness, and multiple children were killed after being struck by cars while they were going to school in the dark. By early October 1974, President Gerald Ford signed a bill ending year-round daylight savings.

The twice-a-year time changes that were established under the Uniform Time Act subsequently resumed and have remained in effect, with slight modifications.

Today, as Congress revisits the possibility of making daylight saving time permanent, the wartime justification for lengthening the workday is not a factor, and there is skepticism that it results in significant energy savings. Given the current high inflation rate and soaring fuel prices, if a positive impact on energy costs could be proven, that may resurface as a compelling argument in its favor, at least temporarily. As history shows, public policy and public opinion on daylight saving time have been anything but permanent.