"You'd be amazed at how much I don't know about my business," says Tim, who owns a large construction company in the Midwest. "I know everything about the financials, the strategy, and the industry. But I don't know exactly what my frontline guys are doing, and I barely know what their supervisors are doing. I don't even know the office gossip, because no one tells that stuff to the boss."

If executives don't practice what they preach about engagement, it'll be harder for others to follow.

Tim worries that crucial items are escaping his attention, but he knows that if he spends more time on nitty-gritty details, he'll have less time to run the company. He suspects that visibility is useful, but he doesn't know if watching someone nail 2x4s promotes overall strategy. And though he says he works very closely with the company's top leaders, he's certain that the construction supervisors are fundamental to the company's success.

"The best I can do is figure out how things went based on the numbers that come in," Tim says. "By then, it's too late to change things."

Tim is right to suspect that his crew supervisors are driving performance indicators, because they play a key role in engaging or disengaging his frontline staff. But according to research recently conducted by Sangeeta Agrawal, a Gallup consultant, and Jim Harter, Ph.D., Gallup's chief scientist of workplace management and well-being, so do Tim's middle managers, his executive team, and Tim himself.

Workplace engagement is the core of the unwritten social contract between employers and employees. It also serves as a leading indicator of financial performance. That's vital for leaders like Tim who otherwise must depend on backward-looking indicators like pre-tax profit, overtime rate, and waste minimization.

What Agrawal and Harter were looking for was a pathway for engagement. Employee engagement can be considered a kind of energy. It causes known reactions, and it requires a source. But what they wanted to investigate was: How does this energy move? Does engagement radiate, starting from a central point and moving outward in all directions? Or is engagement more like electricity, moving in a one-way path from one starting point to an ending point?

These are important questions, because knowing the answers gives business leaders clues to the best place to start with their engagement initiatives. "Knowing how engagement works gives clarity on where to focus first," says Harter. "Engaging ten thousand people at once can seem impossible. CEOs can't meet with that many people on a continual basis."

"Engagement comes from leaders. People look to leadership to set the tone and expectations. Leaders make engagement important," says Agrawal. "If executives don't set the stage and practice what they preach about engagement, it'll be harder for others to follow."

Similarly, frontline employees who are supervised by highly engaged managers are 59% more likely to be engaged than those supervised by managers with below-average engagement.

So it appears there's a "mediation effect," as social scientists call it, in which executives affect managers and managers affect frontline employees. This is good news for leaders like Tim who wonder where their time is best spent. It's best spent with the people they see most often anyway. "You should focus your efforts locally," says Harter. "Work on engaging the team around you, and engagement will cascade."

You should focus your efforts locally. Work on engaging the team around you, and engagement will cascade.

The path to engagement

Agrawal and Harter were interested in knowing more than the energy flow of engagement. They also wanted to know which transmission pathways were strongest or if they were all equally effective. To investigate, they performed a "path analysis" for each of the 12 elements of employee engagement. (See graphic "The 12 Elements of Great Managing.")

To influence the front line through the mediation effect, executives should concentrate on these items:

And to push engagement through the whole organization -- the only way they really can radiate rather than cascade energy -- executives should focus on the elements related to: mission or purpose, knowing what's expected, and progress.

Agrawal and Harter caution that every one of the 12 engagement items is important, and none should be overlooked. They further believe that this cascade effect works regardless of the size of the company. "This pattern emerged across the different sized companies we studied, although the cascade effect is less relevant in very small companies where the CEO can have direct contact and influence on employees more regularly," says Harter. "Engagement in very small companies is higher, probably due to ownership and autonomy. As organizations grow, engagement needs to be maintained across levels, and it starts at the top."

That begs one obvious question: From what source do executives draw their engagement? According to Barry Conchie, coauthor of Strengths Based Leadership: Great Leaders, Teams, and Why People Follow, CEOs and other high-ranking leaders need a particular kind of talent to be "engageable." "CEOs create the conditions for their own engagement. They can influence all the pieces," says Conchie. "If a CEO is disengaged, he or she is either unfit for the role or incapable of creating engagement."

Still, a significant part of employee engagement is related to human interaction. "That's why the board relationship is critical," says Conchie. "Taking time to make the right changes and additions to the board can provide an effective counterbalance and level of accountability for a CEO. These aren't always the safest relationships for CEOs to cultivate, but they can be an important antidote to the loneliness that many CEOs express feeling; they also can help counter a sense of social isolation that might hinder CEOs from taking positive steps to boost their own engagement."

But those aren't the only people a CEO needs around. Agrawal suspects that highly engaged CEOs have a core group of mentors and peers -- people these leaders can turn to who understand them and who will push them when they need to be pushed. "There's a lesson here: When people reach a high status, they may forget they still need to learn and grow and develop," Agrawal says.

It's important for leaders to spend time with other leaders. They need to be engaged and to engage -- and not just for their own sake. Their engagement is crucial because it sets the tone for the engagement of everyone in the company. Engagement is too valuable to neglect at any level in the workplace.

As Tim puts it, "I probably don't need to know how many nails an hour my guys put in. What I need to know is how many they could put in if they wanted to -- and what makes them want to."

Jennifer Robison is a Senior Editor at Gallup.

Do engaged employees create financial success, or does financial success spark engagement? That's the kind of chicken-or-egg question that academics love to ponder but rarely get to answer. In this interview, two researchers share what they've discovered and how it can help managers.

When deciding where to put their money, do investors take into account the engagement level of a company's employees? If not, it's time they did. Gallup research has found that higher workplace engagement predicts higher earnings per share among publicly traded businesses. Read our report of these groundbreaking findings. 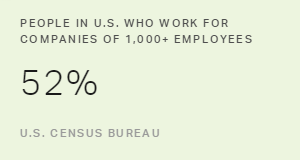