Channel usage is one of the most debated -- and important -- topics in retail banking. Certain patterns are recognized as near universal across the industry, driven by broader societal trends. Chief among these trends: branch transaction volumes are slowly trending down, online and especially mobile banking usage are quickly trending up. Other areas generate more debate in the banking community. For example, will call center usage decline as more transactions migrate to digital platforms, or will it, in fact, increase as customers use call centers as their digital help desk? Will declines in branch usage and a potential shift in the type of transactions handled in the branch bring about shifts in how banks structure and rationalize their branch networks? And will Facebook, Twitter, and other social media platforms, which are largely discretionary, novel channels today, become more mainstream and necessary channels in the future?

In the winter of 2013, Gallup fielded its latest U.S. Retail Banking study and queried customers on their channel usage over the last six months. Three key themes emerged:

When you think about the core banking needs of most consumers -- making routine deposits or withdrawals; managing finances, accounts, and payments; and interacting with a banker or adviser to open an account, add a product, or report a problem -- the combination of branches, ATMs, and online banking would cover all the bases. In fact, nearly half (46%) of customers have used all three of these channels over the past six months, and these "core" customers represent significant value to banks. While it may cost more to serve these customers (compared, for example, to those who use mainly digital or phone channels) they keep an average of 4% more of their deposits and investments with their primary bank and generate an estimated $155 more in profit per year to their primary bank than people who don't use all three of these channels. These aren't unprofitable customers, so while it may be fashionable to talk all digital, banks can't alienate a significant portion of the customer base in the process. 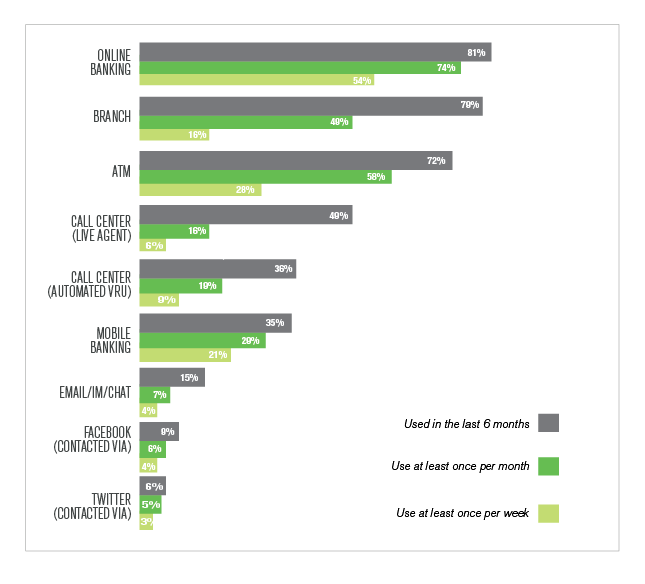 2. Mobile banking usage is on the rise -- adding to, not replacing, other channels.

Among the largest U.S. banks that Gallup studied in both 2012 and 2013, heavy users (at least once per week) of mobile banking increased by 11 percentage points -- more than in any other channel. As you would expect, mobile banking usage is much greater among younger banking customers. Among Millennials/Gen Y customers, 57% have gone mobile for their banking. That percentage falls to 37% for Gen X customers, 16% for baby boomers, and less than 10% for the silent generation.

To this point at least, this increased mobile usage has not led to a significant reduction in customers' use of other channels. Customers that use mobile banking also use other channels more frequently than the average customer -- 79% of mobile banking users have also used a branch in the last six months, 84% have gone to an ATM, 95% have used online banking, and 58% have spoken to a call center agent.

When it comes to social media channels, the contrast between the mobile banking user and the norm is even more pronounced -- not surprising given the rapid mobilization of both Facebook and Twitter in the smartphone age. Among mobile users, 15% have contacted their bank via Twitter and 19% have contacted it via Facebook, compared to only 1% and 2%, respectively, among non-mobile users. The smartphone is bringing customers ever closer to their financial products and services with far greater frequency, and one of the many challenges for banks will be to understand how to leverage this new "relationship fulcrum" most effectively.

Today, at least, there is no requirement that customers interact with their bank via Facebook, Twitter, or any other social media platform. So, you might expect that those who do would be a somewhat different breed of customer -- and you would be right. Just under 9% of customers have contacted their bank via Facebook or Twitter in the past six months, and roughly half of those (just over 4% overall) have done both. This is an important 4% for banks, skewing both younger (91% are either Gen X or Gen Y) and more affluent -- they are 12% more likely to be mass affluent ($100K to less than $1M in investible assets) and 18% more likely to be emerging affluent (age 35 or under with incomes over $75K/year.)

This 4% slice of customers is also very different attitudinally, holding much more positive feelings toward their bank than the typical customer. They are 9% more likely to be fully engaged with their primary bank (rationally loyal and emotionally attached), 14% more likely to say their bank is a name they can always trust, and roughly twice as likely to believe that their bank is the only company they need to use for all their financial needs and to say it makes them feel confident about their financial future. Given the strong "AAA" status (age, affluence, and attitudes) of these customers, it behooves banks to continue to develop, refine, and strengthen their social media focus.

While the world of bank channels is most definitely evolving, it's not exactly the "anything goes" Wild West where everything changes overnight. Bankers and consumers are getting more and more comfortable with the new technologies available to them, and the feeling out process around their preferred interaction methods remains a work in progress. The media may focus on the promise of everything digital and its seeming ability to solve all problems -- and, to a certain extent, that is true. Technology done well can strengthen relationships and streamline the experience. But, for right now, consumers seem to be singing an old familiar tune, "Make new friends, but keep the old. One is silver and the other is gold."