Is Barack Obama really the worst president since World War II? The Quinnipiac Poll announced just that result recently. There were thereafter a number of pushbacks from that conclusion, most based on the fact that such an open-end question reflects a "recency bias" in that Americans think about the presidents who are most top-of-mind. Few average Americans think of Harry Truman when asked about presidents, and a sizable percentage of younger Americans don't remember who Jimmy Carter was. Plus, since partisans overwhelmingly tend to select a president of the opposite party when asked this type of "worst" question, it may be that Republicans have an easier time picking Obama since he is so recently in office, while Democrats "split their vote" between several older Republican presidents.

From a bigger picture perspective, we know that there are certainly a number of ways to evaluate and rank presidents. Historians in particular like this type of parlor game and over the years have produced a number of greatest and worst presidents lists.

But we're interested here in views of presidents from the people's perspective. Rather than asking Americans to retrospectively choose the best and worst presidents, I think a method using contemporaneous polling has some significant advantages. We can examine the job approval ratings earned by each of the 12 presidents who have served since World War II while they were in office, and from that create a list of the best and the worst -- as evaluated by their constituents. This equalizes any recency bias, since all ratings were obtained while the president was in the White House -- giving us an excellent focus on what people thought about them at the time they were doing their job.

This method, too, has its issues, of course. Many argue that the "greatness" of a president may not be known for years or decades to come. Many presidents themselves like to think this is the case, since it provides them a convenient mental way out of the dissonance created by low ratings while in office. George W. Bush comes to mind here. He is able to sidestep questions about his administration by opining that only history will eventually judge how he did -- presumably after he dies. Similarly, there is a five-year waiting period before baseball players can be elected to the Hall of Fame, presumably to let the sports writers who vote have more time to contemplate just how long-lasting their contributions and achievements were. Still, even in this process, the baseball Hall of Fame voters take mostly into account how well the players did while on the field -- batting averages, wins and losses, fielding percentages, ERAs, and so forth. 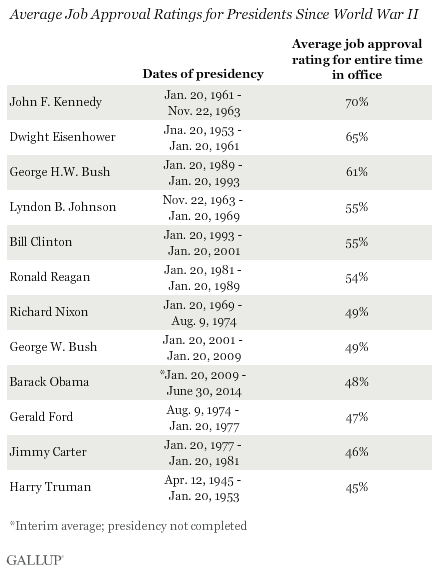 But that's an unknown, so for now, we can deal with what we have: Obama's performance as president from January 2009 through June of 2014. That average -- 48% -- puts Obama in ninth place among the 12 presidents who have served since World War II.

Obama's average to date is slightly ahead of Gerald Ford, Jimmy Carter, and Harry Truman's overall averages for their presidencies. Obama's current 48% average is just a percentage point or two below George W. Bush and Richard Nixon's. Thus, it is certainly not correct to say that Obama is the worst president since World War II. He is clearly in the bottom half of all presidents since World War II using this measure, but not the worst. That distinction belongs to Harry Truman.

Six presidents ended their time in office in the enviable position of having had a majority of Americans on average approving of the job they did as president. This is where any president would like to be. This 50%+ job approval club has as members John F. Kennedy, Dwight Eisenhower, Lyndon Johnson, Ronald Reagan, George H.W. Bush, and Bill Clinton, in that order.

As noted, Obama has now served about five and a half years of the full eight years of his two terms. Seven other presidents since World War II have served second terms. Two of these were not elected to their first terms, but rather ascended to the presidency due to the death of the serving president (Truman and Johnson). One additional president -- Richard Nixon -- made it through June of his sixth year in office, but just barely. Nixon resigned just two months later, in August of 1974.

This table shows the calculation of the average job approval ratings for these seven presidents only through June of their sixth year in office, or about where Obama is today. 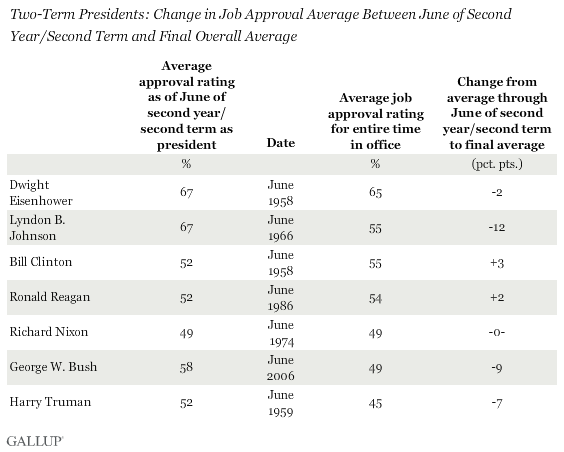 It is clear that things can change dramatically in the last two and a half years of a two-term president's time in office. The biggest changes have been significant drops in approval over the course of these final years. Lyndon Johnson showed the biggest shift. His approval rating was 67% as of June 1966, but by the time he left office in January 1953, his overall average had plummeted to 55%. This large shift was, in part, due to the fact that he served only a little more than a year of his first term, and that he had extraordinarily high ratings up until the second year of his second term. From that point on, the impact of the Vietnam War began to take its toll on LBJ's performance ratings, and when he left office, Johnson's overall average had fallen 12 points, down to 55%.

George W. Bush and Harry Truman also saw their job approval rating averages drop significantly after June of their sixth year in office. Bush had a fairly robust 58% overall rating by June of 2006; he left office with an overall average of 49%. Bush had very high ratings in his first years in office, due to the rally effect that followed 9/11. His last years in office were not good, however, as the Iraq War and other issues began to drag his ratings down. Truman likewise was dogged by the Korean War and a bad economy in his final two and a half years, seeing his average drop from 52% in June 1950 to an overall 45% by the time he left office.

Two presidents saw modest increases in their overall averages compared with their average as of June of their sixth year in office. Bill Clinton went from 52% in June 1998 to 55% overall when he left office, buoyed by a strong economy and high ratings even as he was being impeached and tried in the Senate in his sixth and seventh years. Ronald Reagan edged up slightly from 52% in June 1986 to an overall 54% by the time left office. Reagan's first years in office had been dogged by a very poor economy.

Dwight Eisenhower lost a very slight two percentage points between the average calculated as of June 1958 and his overall average when he left in January 1960. Richard M. Nixon's average didn't change between the calculation done as of June 1974 and his final average after he left office a couple of months later in August 1974.

Thus, these very limited data suggest that Obama has a better than even chance of seeing his rating go down rather than up over the next two and a half years. Looking only at two-term presidents who served a full four years of their first term, it appears that Obama's overall presidential average could, in theory, fall by as much as nine points if he emulated the trajectory of George W. Bush, which would put Obama down as the bottom of the list. On the other hand, should he emulate Bill Clinton's trajectory, he could edge up above the 50% mark and join six other presidents who have enjoyed majority approval ratings for their entire time in office. But the data on two-term presidents are in fact very limited, with a sample size of only seven presidents, so it's more accurate to say that where Obama will eventually end up in the pantheon of the 12 men who have served as president since World War II remains a very open case.