Typhoon Haiyan has left behind chaotic, tangled debris of what used to be vibrant towns and villages in the central Philippines. Images of the destruction are overwhelming to see; it's difficult to fathom living through it. Yet, as I watched this tragedy unfold, I knew Filipinos' resilience would prevail.

The Filipinos I have met have been exceptionally kind, hard-working, and positive. While these are my personal observations, Gallup data support them. The Philippines ranked among the top 10 countries worldwide on Gallup's Positive Emotions Index in 2012. It is the only Asian country in the top 10, while seven of the 10 are Latin American countries. 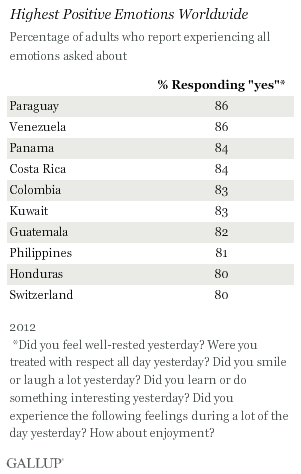 Gallup measured positive emotions in 143 countries in 2012 by asking people whether they experienced enjoyment a lot, felt respected, felt well-rested, laughed and smiled a lot, and learned or did something interesting the previous day. Gallup compiled the "yes" results into a Positive Experience Index score for each country.

Many Filipinos were vulnerable before the storm even made landfall, and now millions in the central Philippines are faced with the difficult task of completely rebuilding their communities and their lives. But this is a nation of hardworking people. In the most recent Gallup survey of the Philippines, 92% of Filipinos said that people in their country can get ahead if they work hard, higher than the worldwide average of 79% in 2012. They have consistently felt that hard work pays off, with more than 75% saying so since Gallup began asking the question there in 2006. 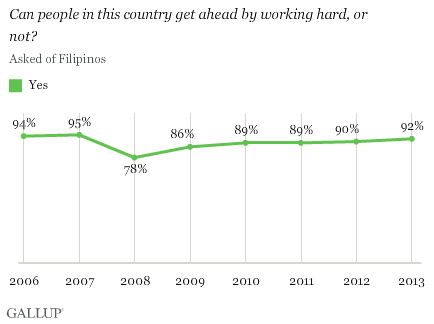 It is this Filipino combination of a belief in hard work and a positive attitude that will help them rebuild and overcome this tragedy.