Icelanders' interest in EU membership and the euro may be economically motivated -- 96% of residents at the time of the Gallup Poll said that economic conditions in the country were not good and 83% expected conditions to get worse. Since the collapse of the country's economy last fall, Iceland has sought a solution for its devalued currency, the krona. Some pundits called for immediate adoption of the euro, but the former governing coalition, under the leadership of the center-right Independence Party, was reluctant to pursue such a course.

Icelanders may have political motivations as well. Last December, nearly 8 in 10 residents (79%) told Gallup they did not approve of their country's leadership. The collapse of the government the following month brought Prime Minister Johanna Sigurdardottir into power and last month's parliamentary vote was the first time center-left parties had won a majority of seats since Iceland's independence from Denmark -- a clear rebuke for the Independence Party's economic indecision and perceived mismanagement.

Iceland has long spurned EU membership for fear of how the Union's marine quotas could hamper the Icelandic fishing economy (fish products account for more than 40% of exports). However, just before Iceland's parliamentary elections, the European Commission (the EU's executive arm) pledged to devise a less restrictive fishing quota system, which could ultimately improve Icelandic opinions toward EU leadership.

New EU member states no longer have the option to opt out of adopting the euro; all must adopt the currency as soon as they meet the requisite economic conditions. While Icelanders have more affinity toward the euro than EU membership, they cannot enjoy the benefits of one without the other. And joining the European Union could draw Icelanders closer to Europe than they have been since their 1944 independence from Denmark.

Results are based on telephone interviews with 502 adults, aged 15 and older, conducted in December 2008 in Iceland. For results based on the total sample of national adults, one can say with 95% confidence that the maximum margin of sampling error is ±5.2 percentage points. In addition to sampling error, question wording and practical difficulties in conducting surveys can introduce error or bias into the findings of public opinion polls.

Cynthia English contributed to this report.

Approval of British leadership worldwide, at 37%, is roughly on par with that of the United States (34%) and France (40%). Low approval in Europe and the Palestinian Territories, in particular, could present challenges for British leadership’s ability to exert its influence in these areas.

Despite lower unemployment ratings, less than half of Danes (48%) tell Gallup their standard of living is improving, and even fewer (41%) perceive the economic conditions in their city to be improving.

Many in Bosnia and Herzegovina Support EU Membership

A Gallup Poll conducted in Bosnia and Herzegovina last year revealed that a majority of residents (66%) believe their country’s membership in the European Union would be a good thing. 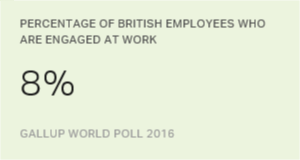