PRINCETON, NJ -- In assessing the legacies of the last 11 U.S. presidents, Republicans and Democrats diverge most in how history will judge Presidents Barack Obama and George W. Bush. Republicans believe Obama will be judged worst among recent presidents, while Democrats predict Bush will. At the same time, Republicans expect Bush to get a favorable historical review, and Democrats anticipate the same for Obama. 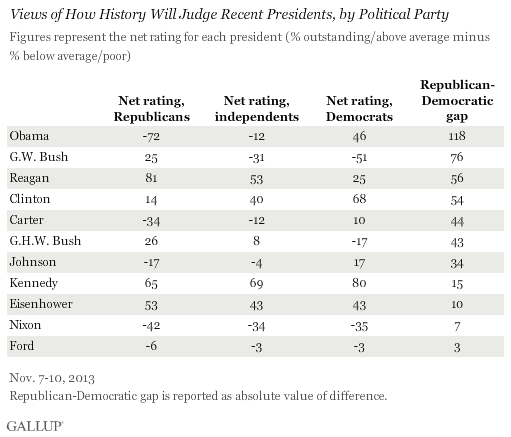 The results are based on a Nov. 7-10 Gallup poll. Overall, Americans judge John F. Kennedy most positively among recent presidents, followed by Ronald Reagan and Bill Clinton. Richard Nixon is rated worst. Americans on balance expect Bush and Obama to be rated negatively, with overall net scores of -22 and -12, respectively.

In addition to the politically polarized views of Obama and Bush, there are also large partisan gaps in ratings of Clinton and Reagan. However, Democrats and Republicans at least agree that Clinton and Reagan will be judged positively; they differ in the extent of the positive ratings.

Americans' highly polarized views of those four presidents are consistent with previous Gallup research showing they had the most polarized job approval ratings while president.

The party gaps in ratings are also relatively small for Nixon, Dwight Eisenhower, and Kennedy.

For full ratings of each president by party, see page 2.

Kennedy Ranks Near Top, Nixon Near Bottom, for All Party Groups

Naturally, the party differences in ratings of presidents produce discrepancies in the relative rank-order of each president by party. However, there are some similarities in how Republicans, Democrats, and independents rank each president on a relative basis.

For example, Democrats and independents rank Kennedy first, and Republicans rank him second to Reagan. Eisenhower ranks third or fourth among each party group.

All three party groups rank Nixon near the bottom. He is the most negatively rated president among independents, and second-most negatively among Republicans (after Obama) and Democrats (after George W. Bush). 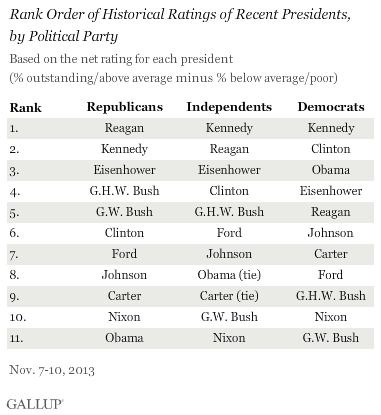 Of the 11 recent presidents, a majority of Americans overall expect three -- Kennedy, Reagan, and Clinton -- to go down in history as outstanding or above average, with Eisenhower the only other to be rated more positively than negatively.

Americans give net-negative ratings to each of the remaining seven presidents. Many of these presidents, especially the more recent ones, operated in a time of highly politically polarized views of their performance, which helps explain the incredibly divergent ratings of the current president.

Certainly, much history remains to be written for Obama's presidency. Gallup conducted the most recent poll at a time when he has near-record-low approval ratings, and has been faced with significant challenges, including problems with the major rollout of the 2010 Affordable Care Act, a government shutdown, the need to raise the federal debt limit, and Syrian chemical weapons attacks. As a result, his own historical rating has grown more negative since the last time Gallup measured it, in February 2012. The actions Obama takes as president over the remaining three years in his term will determine whether Americans evaluate his legacy more positively or more negatively.

For results based on the total sample of 272 Republicans, one can say with 95% confidence that the margin of sampling error is ±8 percentage points.

For results based on the total sample of 292 Democrats, one can say with 95% confidence that the margin of sampling error is ±7 percentage points. 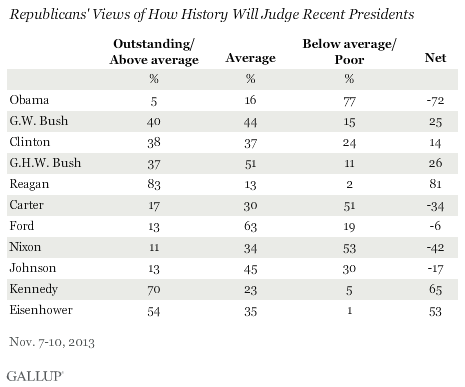 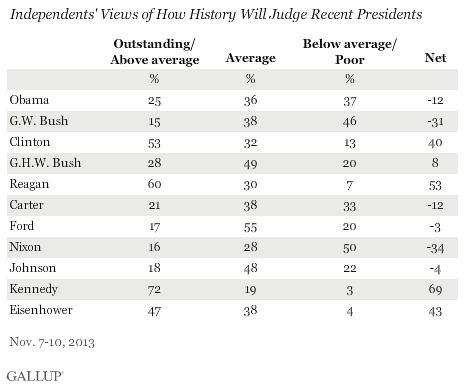 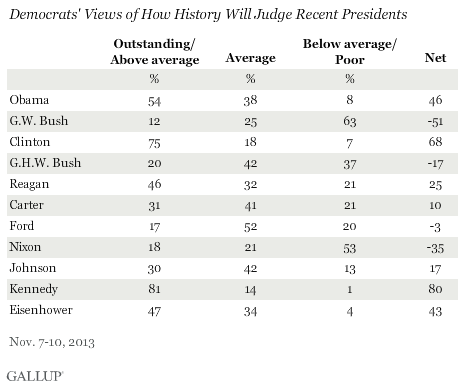