WASHINGTON, D.C. -- A clear majority of Americans, 59%, still view Hillary Clinton favorably a year after she left her post as secretary of state. Clinton's current rating is noticeably lower than the 64% she averaged while serving in President Barack Obama's cabinet. 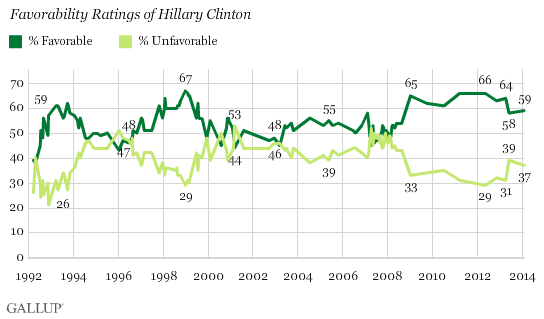 The last time she had a higher unfavorable than favorable rating in the U.S. was in February 2008, when she was running for the Democratic presidential nomination against Obama. The latest findings come from a Gallup poll conducted Feb. 6-9.

Clinton, an enduring figure on the U.S. political stage, has seen her favorability ratings rise and fall since she was introduced to the American public during Bill Clinton's 1992 presidential campaign. The first time Gallup asked Americans about her, in March 1992, 39% viewed her favorably, 26% unfavorably, and 35% either did not know who she was or had no opinion of the then-first lady of Arkansas. Since then, Hillary Clinton's favorability peaked at 67% in late 1998, just after her husband was impeached by the House of Representatives during the Monica Lewinsky scandal, and her rating remained high through most of 1999.

During her time as a U.S. senator, from 2001-2009, her favorability rating leveled off, fluctuating within the 40% and 50% range. Clinton enjoyed a long period of high favorable ratings during her time as secretary of state, staying above 60% during her entire time in Obama's cabinet. Clinton dipped below 60% last June, several months after she left public life, but her ratings remain high.

Americans Still Divided in Their Opinions of Vice President Biden

Joe Biden's image, on the other hand, is not as positive as Hillary Clinton's. Currently, 46% of Americans have a favorable image of the vice president, while 42% view him unfavorably. Biden's favorability exceeded 50% from October 2008 to January 2009, during the end of his successful campaign with Obama and just prior to his inauguration into office. Biden's favorability has been in the 40% range for the entirety of his time as vice president, with unfavorability ratings in the same range. 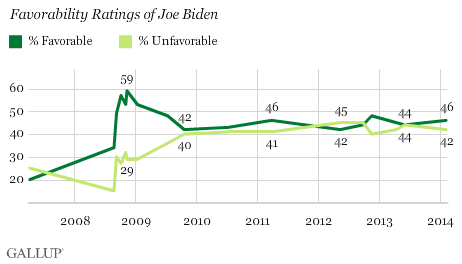 While Gallup has been asking about Clinton since 1992, it has been polling about Biden only since 2007, as he was preparing for the Democratic primary race the next year. The longtime senator from Delaware has been a fixture in public life, however, since 1972, when he was elected to the U.S. Senate just shy of his 30th birthday.

While the 2016 presidential election is more than 2 ½ years away, it is possible that the battle for the Democratic nomination will begin in earnest after the midterm elections this November. Clinton and Biden, two Democratic Party luminaries who have run for president before, are leading contenders, although both have yet to declare their candidacy.

It is also possible that the race will start later because of their high name recognition with the American public. This survey did not measure a head-to-head match-up or Americans' views on their potential candidacies, but these results show that Americans have long had a more positive image of Clinton than of Biden. Biden's favorables have consistently trailed those of his boss, Obama, while roughly 10% to 15% of Americans still have not heard of or have no opinion of the vice president. Conversely, Clinton was consistently a popular member of Obama's cabinet, with higher favorable ratings than the president for all of the time she served in his administration.

Hillary Clinton's favorable rating fell slightly to 58% in June, from 64% in April. But she remains relatively popular despite heightened attention to her leadership on the Benghazi situation.