PRINCETON, N.J. -- Massachusetts and Maryland rank as the most Democratic states, and Wyoming and Utah are the most Republican, based on the political party identification and leanings of their state residents in 2014. The Democratic advantage in Massachusetts and Maryland exceeds 20 percentage points, while Utah and Wyoming show Republican advantages of more than 30 points. 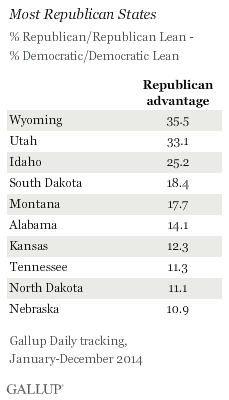 The combined percentage of residents who identify with the Democratic Party or lean toward it, versus the percentage of Republican identifiers and leaners, gives an indication of the relative strength of each party within a state. The full 2014 results for each state are shown in a table at the end of the article. Nationally, Democrats had a slim three-percentage-point advantage in 2014.

The rank order of the states based on their partisanship has been fairly consistent over time. Since Gallup began reporting on state party identification seven years ago, nine states have ranked in the top 10 most Democratic every year, including Massachusetts, Maryland, Rhode Island, New York, Vermont, California, Hawaii, Delaware and Illinois. New Jersey and Connecticut tied for 10th this year, and one or the other has been in the top 10 every year since 2008. Maine is the only other state to rank among the 10 most Democratic since 2008, tying for 10th in 2008.

There has been more variation in the Republican top 10 over time, with 17 different states appearing at least once since 2008. Wyoming and Utah have been the two most Republican states each year, with Idaho placing third in all but two years. In addition to those states, Kansas and Nebraska have ranked in the top 10 every year. Montana, Alabama, North Dakota and Alaska have been in the top 10 all but one year.

The 10 most Democratic and 10 most Republican states all have party gaps greater than 10 percentage points. Gallup classifies these states as solid Democratic or solid Republican. A smaller set of states show a party advantage of greater than five points but less than 10 points. On this basis, Gallup classifies six states as leaning Democratic (Washington state, New Mexico, Pennsylvania, Michigan, Maine and Oregon) and five states as leaning Republican (Alaska, Mississippi, Oklahoma, Arkansas and Indiana).

The remaining 18 "competitive" states have a party advantage for either party of no greater than five percentage points. Within this group, Louisiana, Nevada and Ohio are the most competitive states, with less than one percentage point difference between the two parties.

The solidly Republican states are mainly clustered in the northern part of the Mountain West region and in the western Plains states. The solidly Democratic states are largely in New England and the Middle Atlantic region, but also include two of the more populous states in California and Illinois. Many of the Midwestern states are competitive, along with the southern states bordering the Atlantic Ocean. A state's partisanship is an indicator of how the state will vote in federal and state elections, as well as the types of policies that will become law in those states. Of course, the figures presented here are based on all state residents, and differences in turnout, which usually favor Republicans, can alter the political balance of the state electorate in a given election.

Since 2008, there has been a significant movement away from the Democratic Party both at the national level and in many states. Democrats still maintain a modest advantage in national partisanship, partly because they have an advantage in some of the most highly populated states such as California, New York and Illinois. At the same time, other large states like Florida and Texas are competitive, with Florida showing a slight Democratic edge and Texas a slight Republican one.

In fact, Tennessee and Indiana, which rank 16th and 17th in terms of population, are the most populous states that are either solidly Republican or leaning Republican. The GOP's inability to dominate in many high population, electoral vote-rich states underscores the challenges it faces in presidential elections based on the winner-take-all electoral vote system. The GOP can overcome that deficit with better turnout to some degree, but also must carry the vast majority of competitive states in order to win the election.