From 2000 to 2008, between 54% and 69% of Americans said ensuring healthcare coverage for all citizens was the responsibility of the federal government. But the issue grew more divisive in 2009, as President Barack Obama worked to enact the Affordable Care Act, which Congress passed in 2010. Between 2009 and 2011, Americans were split nearly evenly on the matter. Then from 2012 to 2014, public opinion shifted, with slight majorities saying healthcare coverage was not the government's responsibility. The latest poll was conducted Nov. 4-8 as part of Gallup's annual Health and Healthcare survey.

The percentage who feel the government should have this responsibility has increased across most key demographic groups since 2014, including lower-income Americans (+13 points), 50- to 64-year-olds (+12 points), Democrats and independents who lean Democratic (+9 points) and whites (+8 points). Across three of the country's four regions, this view has increased by seven points or more; the South is the only region where there has been no such change.

Americans who approve of the Affordable Care Act are more than three times as likely as those who disapprove of the law to say healthcare coverage should be the government's responsibility, 80% vs. 26%, respectively. Less than half of whites, Americans aged 50 and older, Republicans and independents who lean Republican, Southerners and higher-income Americans say healthcare coverage is the federal government's responsibility.

Although U.S. adults lean toward the view that the government should ensure all Americans have healthcare coverage, they do not endorse a government-run system, which exists in most other Western nations. When given a choice, 55% say they prefer a system mostly based on private insurance, as the U.S. has now, while 41% would prefer a government-run system. The percentage favoring a private system is down from 61% last year. Though Americans' views on the government's role in healthcare coverage have fluctuated in recent years, they remain just as contentious now as they were prior to the passage of the Affordable Care Act.

The latest result is the most favorable toward the view that the government should be responsible for healthcare coverage since the government took arguably the most significant step in that direction through passing the healthcare law. Still, Americans remain divided on the matter, and continue to favor a system based mostly on private health insurance to a totally government-run system.

Americans' views on the government's responsibility for ensuring healthcare coverage have changed during the Obama administration, with Americans less in favor of the government having that role than before. These data are important to monitor as Obama leaves office, especially because the fate of the healthcare law may depend on the outcome of the 2016 presidential election. Its existence is all but assured if a Democrat wins, but is far less certain if a Republican is elected. 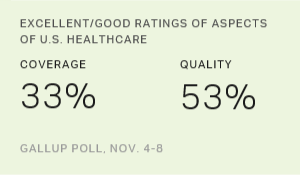 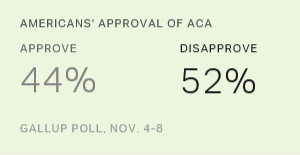