skip to main content
Politics
The 2016 State of the Union: Considering the Public's Opinion

PRINCETON, N.J. -- President Barack Obama delivered his final State of the Union address this week, providing an opportunity to analyze existing public opinion about some of the proposals and assertions he made in his speech.

In many cases, the president accurately assesses the state of public opinion or offers proposals that the American public is likely to support. On some, though, Americans probably disagree.

Here are key moments in the speech and what Americans have already said about these ideas:

All these trends have squeezed workers, even when they have jobs; even when the economy is growing. It's made it harder for a hardworking family to pull itself out of poverty, harder for young people to start their careers, tougher for workers to retire when they want to.

This downcast view of Americans' financial circumstances may have been more appropriate during the recession than it is today. Seventy-nine percent of Americans in December said they were satisfied with their standard of living and 62% said it was getting better. That is substantially improved over the low point in November 2008 when 69% were satisfied and just 35% believed it was getting better. Of eight indicators of Americans' financial health that Gallup tracks annually each April, retirement is at the top, with 60% saying they are very or moderately worried that they won't have enough money for it. While this is down from 67% in 2012, it is still higher than the 52% to 54% range found in the early 2000s.

In the coming years, we should build on that progress [No Child Left Behind], by providing pre-K for all.

Recent Gallup polling has found broad and bipartisan support for expanding federal funding for preschool education. In 2014, 70% of U.S. adults, including 87% of Democrats and 53% of Republicans, favored increasing federal preschool funding to make sure high-quality preschool programs were available to every child in the country. Separately, in 2013, 73% of U.S. adults told Gallup that if given the choice, they would vote "for" a law establishing federal and state programs that "would make high-quality preschools available to every child in America."

That's why Social Security and Medicare are more important than ever. We shouldn't weaken them; we should strengthen them.

Two-thirds of Americans believe the Social Security system either has major problems (45%) or is in a state of crisis (21%). Further, the percentage of Americans who believe the system will be able to pay them a benefit when they retire drops from 66% of adults aged 50 to 64, to just a third of those younger than 50. Accordingly, eight in 10 Americans believe reforming the Social Security system to ensure it remains solvent would be a very (50%) or somewhat (31%) effective way to help the nation's economy.

That … is what the Affordable Care Act is all about. It's about filling the gaps in employer-based care so that when you lose a job, or you go back to school, or you strike out and launch that new business, you'll still have coverage. Nearly 18 million people have gained coverage so far. And in the process, healthcare inflation has slowed. And our businesses have created jobs every single month since it became law.

Gallup polling documents a 5.2-percentage-point decline in the nation's uninsured rate since Obamacare went into effect, from 17.1% to 11.9%. Despite this sizable decline, slightly more Americans in April 2015 said the new healthcare law was hurting their family's healthcare situation than said it was helping it, 23% vs. 17%. The majority said it wasn't affecting them. In the same poll, Americans' outlook for how the law would affect the national healthcare situation also tilted negative, with 43% saying it would make things worse vs. 37% better.

But there are some areas where … it has been difficult to find agreement over the last seven years. And a lot of them fall under the category of what role the government should play in making sure the system's not rigged in favor of the wealthiest and biggest corporations.

Obama's implicit assumption here is that the system is rigged in favor of big companies, and Americans' opinions generally fit in with that assumption. Almost two-thirds are dissatisfied with the size and influence of major corporations in the U.S., and almost all of these indicate it is because they want major corporations to have less influence. Only 16% of Americans say corporations pay their fair share of taxes, while most of the rest -- 69% -- say they pay too little in taxes, a finding that has been consistent since 2001. The size of the business is pivotal here. Gallup's annual update on confidence in institutions finds that big business scores near the bottom with only a 21% confidence rating, while small business is near the top with a confidence rating that is more than three times as high.

I believe a thriving private sector is the lifeblood of our economy. I think there are outdated regulations that need to be changed. There is red tape that needs to be cut.

Gallup polling on government regulations affecting the private sector finds Americans tilting toward believing these regulations are too onerous. However, there are mixed signals about the extent of this viewpoint. Each year since 2010, roughly half of Americans have said in Gallup's September Governance survey that there is too much government regulation of business and industry, including 49% in 2015. Less than a quarter think there is too little. On the other hand, in Gallup's 2016 January Mood of the Nation survey, only 25% of U.S. adults indicated they are dissatisfied with government regulations on business and industry, and want less of them. Nearly as many, 20%, are dissatisfied and want more. The rest are largely satisfied with regulations, perhaps indicating this is not a pressing issue for many.

Look, if anybody still wants to dispute the science around climate change, have at it. You will be pretty lonely, because you'll be debating our military, most of America's business leaders, the majority of the American people, almost the entire scientific community and 200 nations around the world who agree it's a problem and intend to solve it.

Fifty-five percent of Americans in 2015 expressed solid belief in global warming. That's the proportion saying increases in global temperature over the last century are mainly the result of human activity, as well as the percentage believing the effects of climate change are already occurring. Sizable minorities disagree with both propositions, including 41% who say global warming is a natural occurrence. But perhaps more relevant from the standpoint of activating the public to take action, fewer than four Americans (37%) believe global warming will pose a serious threat to them in their lifetime, while 62% disagree.

I told you earlier all the talk of America's economic decline is political hot air. Well, so is all the rhetoric you hear about our enemies getting stronger and America getting weaker. Let me tell you something. The United States of America is the most powerful nation on Earth. Period.

Obama's claim that the U.S. is the most powerful nation on Earth meshes with public opinion in reference to the U.S. military. Fifty-nine percent of Americans say the United States is the No. 1 military power in the world, while most of the rest, 38%, say the U.S. is only one of several leading military powers. Further, over two-thirds say it is important that the U.S. be the world's No. 1 military power. Gallup's January update shows that satisfaction with the nation's military strength and preparedness has actually dropped this year to 59%, the lowest level since the measure began in 2001. At one point in January 2003, still in the proximate aftermath of 9/11, 83% said they were satisfied.

Standing on the World Stage

Our troops are the finest fighting force in the history of the world. No nation attacks us directly, or our allies, because they know that's the path to ruin. Surveys show our standing around the world is higher than when I was elected to this office, and when it comes to every important international issue, people of the world do not look to Beijing or Moscow to lead -- they call us.

Median approval of U.S. leadership worldwide jumped from 34% in 2008 to 49% in 2009, according to Gallup World Poll data. Since then, it has generally been flat, and is currently at 45%. The U.S. typically receives higher marks for its leadership than other world powers evaluated in the Gallup World Poll, including China, Russia, Germany and the European Union.

The President and Congress

It will only happen if we fix our politics. … Too many Americans feel that way right now. It's one of the few regrets of my presidency -- that the rancor and suspicion between the parties has gotten worse instead of better.

Americans clearly are negative about the elected representatives who come from the two parties in Congress, whose average approval rating in 2015 was 16%, just two points above its all-time yearly low of 14% recorded in 2013. Obama's statement that rancor and suspicion have gotten worse is supported by the finding that in the year Obama took office, approval of Congress averaged 30%. Previous research has shown that the supermajority of Americans who disapprove of Congress volunteer two reasons for this: that there is too much bickering and gridlock, and that Congress is not getting anything done. Asked what could be done to fix Congress, other than "fire them all," the American people are most likely to say more bipartisan cooperation and working together. 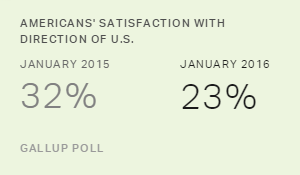