PRINCETON, N.J. -- Sixty-two percent of Americans are satisfied with the ability of a person in the U.S. to get ahead by working hard. These views are more positive now than a few years ago when this figure dipped to 53%, but still well below the high point of 77% measured in the early 2000s. In 2001 and 2002, the first two years Gallup tracked this measure, Americans' satisfaction levels were much higher, at 76% and 77%. This, in part, reflected the tail end of the dot.com boom in 2001 and the rally effect produced by the 9/11 terrorist attacks in the January 2002 update.

After 2002, satisfaction with economic mobility dropped slightly to the 66% to 70% range, and then dropped further after 2008 to the overall low point of 53% in 2012. Since then, satisfaction has edged back up, and the most recent 62% reading is the highest since January 2008.

Attitudes about the ability of a person to get ahead in the country by working hard -- a measure often called economic mobility or equality of opportunity -- are a significant part of the current U.S. debate over inequality. President Barack Obama, Pope Francis and many presidential candidates have talked about the problem of inequality and what should be done about it, and the topic has become the leitmotif of Sen. Bernie Sanders' campaign.

The concept of economic inequality is complex, involving not only mobility and opportunity, but also the broad structure of the economic system in which people attempt to get ahead -- sometimes called equality of outcomes. This structural aspect involves the way income and wealth are distributed overall, and Gallup began measuring Americans' satisfaction with this aspect of U.S. society in 2014. Republicans and Democrats Equally Satisfied With Ability to Get Ahead in U.S.

Although Republican and Democratic leaders seem to have very different takes on the ability of people to get ahead in the U.S., rank-and-file Republicans and Democrats have similar levels of satisfaction with economic mobility. Young Americans are slightly less satisfied than those 30 and older, but this difference is not large.

However, there is a substantial difference across political lines in how Americans view the distribution of income and wealth in the U.S. Republicans (43%) are more than twice as satisfied as Democrats (18%), with independents about at the national average. But even though they are more satisfied, Republican satisfaction is still below the majority level. There are no major differences across age groups on this measure. President Obama has made economic inequality a key issue for his administration, often calling for giving every American a "fair shake" and that "everyone plays by the same set of rules." This conception focuses mainly on economic opportunity, and despite Obama and other politicians' claims that the American dream of getting ahead has faded, over six in 10 Americans are satisfied with the ability of a person in the U.S. to get ahead by working hard, up from a few years ago.

Obama has also called for reducing the extremes of inequality by adjusting the distribution of wealth and income in this country, including proposals to cut taxes on middle-income families and increase them on high-income families, and higher taxes on upper-income taxpayers enacted to help fund the Affordable Care Act. These efforts would appear to strike more of a chord with Americans, with less than a third saying they are satisfied with the distribution of income and wealth in the country. Other Gallup research shows that a significant majority of Americans say that income and wealth should be more evenly distributed, and a slight majority go so far as to favor "heavy taxes" on the rich to accomplish this goal. 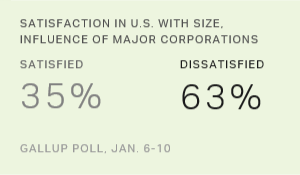 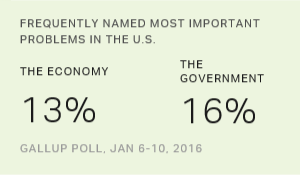 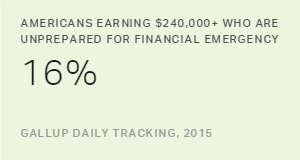