WASHINGTON, D.C. -- China's heightened spending on education in the past decade may be paying off, at least in its residents' eyes. More Chinese today (61%) express satisfaction with their own education than they did in 2009, when satisfaction was well below 50%.

China's investment in nine-year mandatory education has increased at 19.4% annually over the past decade, according to the Chinese Ministry of Finance. This expenditure has likely contributed to quadrupling the number of college graduates in the last 10 years. Therefore, it is not surprising that younger Chinese -- those currently or most recently involved in the education system -- are the most satisfied with their education. In 2015, three-quarters (75%) of Chinese aged 15 to 24 said they are satisfied, at least 16 percentage points higher than all other age groups. Chinese Women Now as Satisfied as Men With Their Education

After lagging behind men in earlier years, today Chinese women are as likely as men to be satisfied with their education, at 61% each. Gallup's findings generally mirror the tertiary education enrollment figures for women in China, where female university enrollment began rising in 2007 and now surpasses that of men, according to the World Bank.

Despite the government's substantial education expenditures over the past decade, rural Chinese continue to lag behind their urban counterparts in satisfaction with their own education. Nearly two-thirds of those in large cities (65%) are currently satisfied, compared with six in 10 (60%) of Chinese living in rural areas -- although this is the narrowest urban/rural gap Gallup has recorded since it began this measurement in 2006.

Chinese may be reaping the rewards of increased government spending on education -- particularly women, whose satisfaction with their education has surged by 23 points in the past six years alone.

Satisfaction among rural Chinese has increased dramatically as well, but the urban/rural education gap remains. However, students in rural China have just begun receiving a significant boost in education subsidies. Previously, nine-year compulsory education students were entitled to varying amounts of public funds based on the cost of living in each geographic area and on household income, resulting in much larger subsidies for children living in large cities than those in rural China. But beginning this year, those education subsidies will be standardized across the country. This means rural students, as well as children of workers who migrate to large cities for employment, will receive the same public education funding as urban children. As funding parity takes hold, the urban/rural gap in education satisfaction may narrow even more. 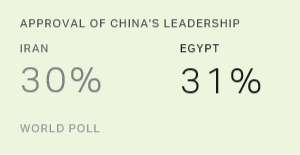 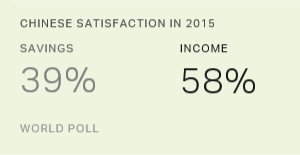 The satisfaction that Chinese have with their household income tumbled precipitously in the past year, dropping from 66% to 58%. Satisfaction with savings also declined.