PRINCETON, N.J. -- Tax reform is a central issue in this year's GOP presidential nomination race, with Republican candidates proposing a number of ways to simplify and reduce taxes. When asked to react to six of these tax-related proposals, Americans generally are more positive than negative about all, although by widely varying margins. Americans are most in favor of eliminating tax deductions and loopholes available to the very rich, followed by eliminating the estate tax -- the only two proposals to get majority support. They are less likely to favor sweeping proposals to cut income taxes for everyone or to install a 10% flat tax plan. A significant segment of Americans say they don't know enough about these tax proposals to have an opinion.

Views on Six Proposals to Reform Tax System in U.S.

Americans were asked about their views on these tax proposals as part of Gallup's ongoing effort to test public support for specific policy recommendations made by candidates from both parties in this year's election cycle.

Americans' support for tax reform ideas generally lands in the middle of the group of all proposals tested to date. They generate less support than the top-rated proposals -- such as providing easier access to healthcare for veterans -- but are viewed much more positively than widely rejected proposals such as eliminating entire cabinet-level departments of government such as the Departments of Education and Energy.

Five of the six tax proposals tested here are part of Donald Trump's detailed tax reform plan. Ted Cruz has championed the idea of a 10% flat tax, and Cruz joins Trump in advocating for eliminating the estate or "death" tax.

Almost two-thirds of Americans agree with the idea of closing loopholes and removing deductions "available to the very rich." This finding is consistent with previous Gallup research showing that a majority of Americans favor heavier taxes on the wealthy. Just 1% of Americans consider themselves to be upper class and most likely don't think they would be affected by tax changes aimed at the very rich. In addition to Trump, Democratic candidates Bernie Sanders and Hillary Clinton have also put forth broadly similar proposals aimed at higher-income tax payers.

Overall, broad plans to cut taxes for all income levels (part of Trump's plan) and to reduce the current complex system to a simple 10% flat tax (Cruz's proposal) are by no means big winners -- even though they seemingly could benefit everyone. Less than half of Americans agree with these proposals, and about three in 10 disagree with them. Sizable percentages say they don't know enough to have an opinion. Americans give about the same level of support for Trump's idea of lowering the federal corporate income tax rate to 15% for all businesses.

Trump's idea of simplifying the tax code into four brackets, rather than the current seven, receives about four times as much support as opposition -- 47% vs. 12% -- but 41% of Americans, the highest for any proposal tested, say they don't know enough about it to have an opinion.

Over half of Americans agree with the idea of eliminating the estate tax "paid when a person dies," with a relatively low level of disagreement.

Tax reform is not a high priority for the average American. Few mention taxes when asked to name the most important problem facing the nation today, and taxes also rank below average when Americans rate the importance of various issues that will help determine their vote for president.

Despite the public's apparent lack of urgency about reforming taxes, the leading GOP presidential candidates have offered detailed proposals to change the tax system, most likely because they believe that taxes represent the most obvious way in which the federal government factors into citizens' lives. (Democratic candidates' proposals on economic-related issues will be reviewed in future releases.)

The tax proposals tested in this analysis generate more agreement than disagreement among Americans, but only two -- closing loopholes/eliminating deductions available to the rich and eliminating the estate tax -- have majority support. Americans do not appear to be highly enthusiastic about broad plans to cut everyone's taxes or move to a flat tax system, but they aren't entirely unenthusiastic either.

Many Americans say they don't know enough about these proposals to have an opinion, so it is likely support could change, in either direction, as Americans become familiar with them in the remaining months of the election season.

Results for this Gallup poll are based on telephone interviews conducted March 9-13, 2016, on the Gallup U.S. Daily survey, with each proposal rated by between 516 and 559 national adults living in all 50 U.S. states and the District of Columbia. Results for each proposal have a margin of error of ±6 percentage points at the 95% confidence level. All reported margins of sampling error include computed design effects for weighting. 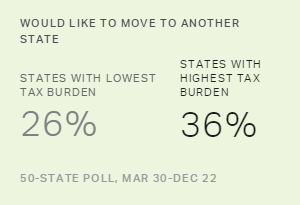