skip to main content
Politics
Opposition to Fracking Mounts in the U.S.

WASHINGTON, D.C. -- Opposition to the practice of hydraulic fracturing or "fracking" has increased significantly in the past year as environmental concerns, such as earthquakes, have grown, even though the procedure has helped keep oil prices low.

In the past year, the price of oil has fluctuated between roughly $25 and $60 per barrel, a staggering drop from its peak of around $120 in mid-2014. One major reason the price of this commodity has remained so low is fracking, which now accounts for half of the oil production in the U.S. As recently as 2000, fracking made up only 2% of the nation's oil output.

In Gallup's 2016 Environment survey, conducted March 2-6, Americans have a clearer position on fracking than they did a year ago. Last year, 40% said they favored fracking and 40% were opposed, with a substantial 19% not knowing about or having no opinion on fracking. In 2016, support for fracking has slipped to 36%, while opposition has climbed to 51%. The percentage of Americans with no opinion has dropped to 13%, perhaps as the term becomes more commonplace in the culture, or as the media has more extensively covered the arguments for and against fracking.

Americans' turn against fracking comes as the percentage predicting there will be a critical energy shortage in the next five years has fallen to a new low, likely because of lower gas prices. With oil and gas relatively cheap, many Americans may not see the need to fracture the earth through fracking. Lower oil and gas prices may also be the reason a majority of Americans are opposed to nuclear energy for the first time. Additionally, more people would like to prioritize alternative energy over traditional energy sources. Fracking, while a relatively new way to extract oil, is still a means of harnessing fossil-fuel energy, helping explain why Americans may be growing averse to it.

Republicans Not as Supportive of Fracking in 2016

Republicans had the biggest drop in support for fracking, falling from 66% support in 2015 to 55% this year. Still, Republicans' support for fracking far exceeds support among independents (34%) and Democrats (25%). Views among the last two groups are essentially unchanged from last year.

Fracking has become a contentious topic in American life. In recent years, it has been seen as a source of great prosperity for the nation's crude oil producers, yet it has also become part of a global tug of war with Saudi Arabia. The Middle Eastern oil behemoth has been engaged in a pricing battle with American oil companies, with its goal being lower prices to make the cost of fracking too expensive for U.S. companies to pursue.

Fracking is potentially a cause of earthquakes across sections of the U.S. that are not used to these types of natural disasters. The U.S. Geological Survey said this week that 7 million Americans are at risk of experiencing earthquakes caused by fracking in the states of Oklahoma, Kansas, Texas, Colorado, New Mexico and Arkansas. With more than 1,000 earthquakes in the central U.S. alone last year, these events could be linked to the rising percentage of Americans who oppose fracking.

For the foreseeable future, fracking appears to be a way to extract oil from shale. Oil producers nationwide have said that if oil prices remain above $40 per barrel, it is prudent to use fracking to drill for crude oil. Previously, producers had said that price needed to be $70. With the U.S. effectively swimming in shale oil, the deliberation over fracking will likely continue for years to come. 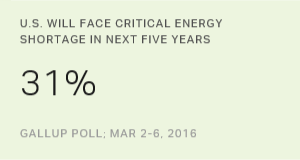 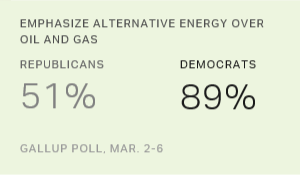 As an oil surplus keeps gas prices low, more Americans now than in recent years favor emphasizing alternative energy over fossil fuel production. Support for alternative energy has increased among both Democrats and Republicans since 2013. 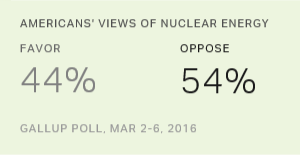