WASHINGTON, D.C. -- Democrats and Democratic-leaning independents who would like to see Hillary Clinton win the Democratic presidential nomination most frequently cite her qualifications, White House experience and care for the needs of the people as the reasons they favor her over Sen. Bernie Sanders.

Other reasons Clinton supporters give to explain why they back her include the desire or need for a female president, her platform and overall views and her intelligence. Nine percent did not offer an opinion as to why they support the former first lady, U.S. senator and secretary of state.

These data, based on a March 21-23 Gallup poll, come as Clinton and Sanders gear up for important primary contests in Wisconsin and New York.

Gallup asked Democrats and Democratic-leaning independents who said they would support Clinton or Sanders to indicate in their own words what lies behind their preference. Responses to this question were coded into major categories as displayed in the accompanying tables.

As the results show, Clinton supporters tend to cite aspects of her background and character as reasons for her supporting her. Beyond the 8% saying they like her platform, the only specific mention of issues or policy is her being well-versed in foreign policy (4%). This, however, is likely tied in to her experience as secretary of state.

More Sanders supporters reference aspects of his policy stances, such as his focus on education and college tuition (10%) and healthcare problems (4%). These are in addition to the 19% who more generally say they agree with his views.

The single most common mention about the Vermont senator, however, is that he cares about and connects with the people and their needs (22%).

Clinton supporters and Sanders supporters offer fairly different reasons why they prefer their candidate to be the Democratic nominee, mostly focusing on the candidates' relative strengths.

Clinton's supporters commonly prefer her for what she has accomplished, in terms of her résumé and job experience. Sanders' supporters more commonly mention his care for Americans' needs and his platform positions. It is unclear whether these responses reflect Democrats' principal reasons for their support of Clinton or Sanders, or if the responses largely reflect what Democrats think of first when they are asked to explain their choice in an open-ended question format.

Once the nomination is settled, supporters of the losing candidate most likely will join with supporters of the victor as he or she prepares to face the Republican nominee in the general election. And as the campaign shifts from the nomination to the general election phase, those who supported the losing candidate for the Democratic nomination will likely find reasons to embrace the Democratic nominee over the Republican. 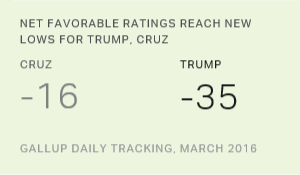 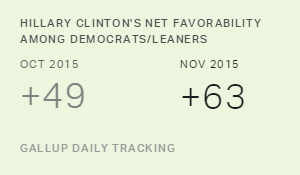 Democrats have become increasingly positive about Hillary Clinton since the highly viewed Democratic debate on Oct. 13, while their views of Bernie Sanders are static. A third of Democrats are still unfamiliar with Sanders. 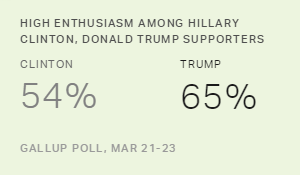