PRINCETON, N.J. -- U.S. public opinion on abortion was largely steady over the past year, as Americans remained split on the morality of abortion as well as in their preferences for the "pro-choice" vs. "pro-life" labels. The vast majority of adults continue to believe abortion should be legal to some extent, with 29% saying it should be legal in all circumstances and 50% favoring legality under certain circumstances.

The public's attitudes on the morality of abortion reflect a recent split, and contrast with a slightly more conservative stance seen in most years from 2002 through 2014. During that period, 50% of Americans, on average, called abortion morally wrong, while only 39% called it morally acceptable. Analysis of the trend by age indicates the shift is mainly because older adults, those aged 55 and older, have grown more likely to consider abortion morally acceptable. Over the same period, Americans' perceptions of themselves as either "pro-choice" or "pro-life" in their abortion views have bounced around somewhat, but have generally broken fairly evenly since 2010. This contrasts with the period from 2004 through 2008, when the "pro-choice" position held a consistent edge. A follow-up question asked of those favoring the middle position clarifies that most of these -- constituting 37% of Americans -- think abortion should generally be rare, occurring in only a few circumstances. The other 13% think it should be legal in most circumstances or are unsure.

In contrast with public support for gay rights -- more specifically, same-sex marriage -- which has grown in recent years, Americans' views on abortion have been remarkably steady. Not only have attitudes changed little in the past year, but they also have been broadly steady over the past decade, spanning three presidential elections. While Americans are a bit more likely to call abortion morally acceptable today than they were in 2004, 2008 and 2012, the percentage calling themselves "pro-choice" is similar to what Gallup found in those years. The overall stability provides a predictable political environment for candidates. Additionally, as Gallup reported previously, the 20% of Americans saying they will vote only for a candidate who agrees with them on abortion has also remained steady, with pro-life voters slightly more likely than pro-choice voters to say the issue is critical to their vote. 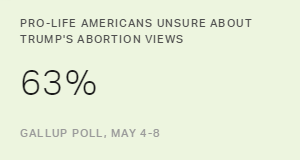 The majority of Americans, 59%, still view Planned Parenthood positively, but that is down from 81% when Gallup last asked about it, in 1993. Favorability has dropped more among Republicans than among Democrats or independents.