PRINCETON, N.J. -- If the race for president comes down to Donald Trump and Hillary Clinton, Trump could benefit from an edge in public confidence on the issues Americans are prioritizing most this election. A slight majority of Americans choose Trump as better able to handle the economy (53%) and jobs (52%), and 50% choose him -- versus 46% who choose Clinton -- on terrorism and national security.

At the same time, the Democratic front-runner boasts commanding leads over the presumptive Republican nominee in public perceptions of who can best handle education and healthcare, with 61% and 56%, respectively, choosing Clinton over Trump on these issues. Both issues rank among the top five Americans say will influence their vote for president.

These findings come from a May 18-22 Gallup poll in which U.S. adults were first asked to rate how important each of 17 prominent national issues will be to their vote for president this year, and then to say whether Clinton or Trump would best handle each issue. As Gallup reported previously, most of the issues Americans rate as highly important are economic and national defense-related. By contrast, most of the bottom eight involve social policy, trade and the environment. (See the full list in the table at the end of the story.)

Overall, Trump leads Clinton in public perceptions of who would better handle eight of the 17 issues. Beyond his modest leads on the economy (+10) and jobs (+7), and slight edge on terrorism (+4), he leads on several lower-ranked concerns: the federal budget deficit (+18), the size and efficiency of the federal government (+14), regulation of banks and Wall Street (+11), taxes (+8) and gun policy (+5).

Meanwhile, Clinton has advantages on eight other issues. However, aside from education (+26) and healthcare (+16) these tend to be lower-ranking concerns: climate change (+38), the treatment of minority groups in the U.S. (+38), social issues such as gay marriage and abortion (+33), foreign affairs (+21), income and wealth distribution (+8), and immigration (+8).

Trade, a relatively low-ranked election issue, is the one area where the candidates are tied. Neither Clinton's foreign policy credentials nor Trump's business credentials and emphasis on trade policies in his campaign have given either candidate an advantage on the issue. Both Trump and Clinton are on record opposing the Trans-Pacific Partnership now being debated in Congress.

Trump Leads on Higher-Profile Issues, but by Slimmer Margins

More Americans prefer Trump than Clinton to handle the issues of utmost importance to voters this fall -- the economy in general as well as employment and jobs, specifically. More broadly, Trump's center of gravity on the issues is a little higher on the priority scale than Clinton's. On the other hand, the candidates are tied in the sheer number of issues on which each is preferred. And while Clinton tends to lead Trump by wide margins in the issues for which she is favored, Trump's leads are a bit tenuous and could more easily dwindle or disappear. Still, as of today, the issue advantage seems to go to Trump. 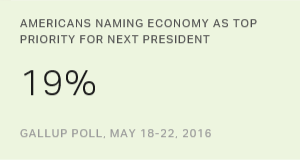 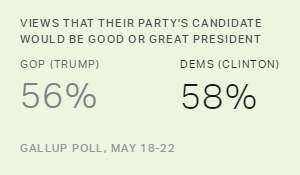 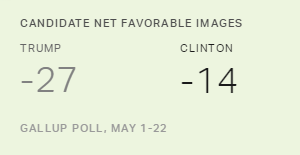