WASHINGTON, D.C. -- Since their respective selections as vice presidential candidates, both Mike Pence and Tim Kaine have become much better known nationwide, but Pence's image has grown significantly more positive over this time than has been the case for Kaine. As of now, Republicans are embracing Pence more than Democrats are embracing Kaine.

At this stage in the previous campaigns, most non-incumbent vice presidential candidates had substantially higher favorable ratings than Kaine and Pence do. Al Gore was at 62% favorable at this point in 1992; Jack Kemp was at 56% in 1996; Dick Cheney was at 51% and Joe Lieberman was at 55% in 2000; and John Edwards was at 59% in 2004. Gallup did not have polling for Joe Biden and Sarah Palin at this point in August in 2008 or for Paul Ryan in 2012.

Both Pence's favorable and unfavorable ratings have risen, while the percentage of those who have never heard of him or have no opinion has dropped from 65% before the Republican convention to 39%. His favorable rating has gone up more than his unfavorable rating. The Indiana governor received some nationwide media attention last year for signing a "religious freedom" law that LGBT Indianans sharply criticized, and was facing a difficult gubernatorial re-election campaign before GOP presidential nominee Donald Trump chose him to be his running mate.

Trump has garnered many headlines since the conventions, including his pronouncements about the Muslim family whose Army captain son was killed in Iraq, the tensions between him and House Speaker Paul Ryan, and whether nuclear weapons can or should be used. The conciliatory statements Pence made may be seen as an attempt to assuage the situation by endorsing Ryan days before Trump did and by sympathizing with the soldier's family. Yet while Trump's statements have not helped his own favorable ratings, Pence has gained substantially in net favorability -- the percentage with a positive opinion of him minus the percentage with a negative opinion.

Pence is better known and liked across key subgroups than he was before the Republican convention, especially among members of his own Republican Party.

Sixty-four percent of Republicans have a favorable impression of Pence, up from 40% in mid-July. He has risen to 33% favorability among independents and even has a 17% score among Democrats, up from a paltry 5% in July.

Americans' overall image of Kaine has become somewhat more negative since the beginning of the Democratic convention, contrasting with Pence's more positive movement. The U.S. senator from Virginia and former Virginia governor has a favorable rating of 33%, up from 24% before the convention. But his unfavorable rating has increased from 14% to 30%. Kaine's running mate, Hillary Clinton, has been much more low-key in her public appearances and statements than Trump has been in the last several weeks, with less controversy surrounding the Democratic campaign.

As was true of Pence, a large share of Americans, 63%, had not heard of or had no opinion of Kaine at the time of his selection as a vice presidential candidate. In Gallup's early August poll, the percentage unfamiliar with Kaine has dropped to 37%. But while Pence has been able to convert proportionately more of those unfamiliar with him to a positive opinion, Kaine has had a proportionately greater gain in those having a negative opinion of him. As a result, Pence's net favorable is currently +11, compared with +3 for Kaine.

Among subgroups, Kaine has made gains, but these have been modest. Only among Democrats does Kaine have a majority favorable rating, at 54%, but this is worse than Pence's 64% favorable rating among Republicans. It is possible that Bernie Sanders voters may have wished that Clinton picked a more liberal running mate, and they are still holding that against Kaine.

The American public is getting to know Pence and Kaine. The vice presidential nominees' favorable ratings are rising, but Pence's gains have been more substantial than Kaine's since their respective nominating conventions. In the next three months, the American people will continue to form opinions of Kaine and Pence, and their images may be affected by the forthcoming vice presidential debate on Oct. 4 at Longwood University in Virginia. 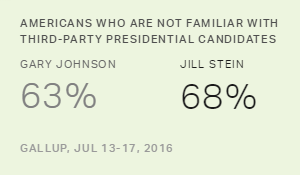 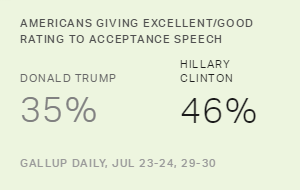 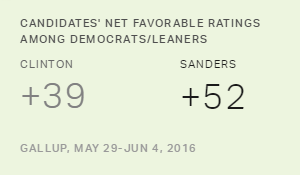