The results are based on Gallup's annual Work and Education poll. In this year's poll, conducted Aug. 3-7, Gallup asked Americans for the first time since 2011 to assess unions' effect on the U.S. economy, on unionized companies, and on union and nonunion workers.

Americans' opinions of whether unions help unionized companies, union workers and nonunion workers all declined slightly in 2009 during the recession by four or five percentage points each. Those are much smaller declines than the 14-point drop in assessments of whether unions mostly helped the U.S. economy during the same year. The public's views of labor unions' effect on workers and companies are similar now to what they were before the recession.

Union approval fell to an all-time low of 48% in 2009 and has recovered modestly since then, though it has yet to reach the 59% it held in the last pre-recession reading. Americans were also less approving of unions when the economy declined in the late 1970s and early 1980s. Union approval reached its high points of 75% in 1953 and 1957 Gallup polls. One reason recent opinions on unions have remained less positive than in the past is that Republicans have become increasingly negative toward them. Currently, 32% of Republicans approve of unions, compared with an average 43% approval from 2001 to 2007. Democrats' and independents' current approval ratings of unions -- 78% and 57%, respectively -- are essentially unchanged from 2001 to 2007 averages (76% of Democrats and 59% of independents).

Americans have historically evaluated unions more positively than negatively, a trend that continued even as union membership in the U.S. declined significantly in recent decades. It wasn't until the Great Recession that union approval dropped below the majority level and Americans' assessments of unions' effect on the economy, workers and companies also grew more negative at that time.

Now, Americans' opinions of unions have mostly recovered to what they were before the recession began. But their approval of labor unions remains slightly below pre-recession levels, largely because Republicans have become increasingly negative toward them. This is consistent with other trends toward greater partisan divides on political opinions such as presidential job approval and attitudes on policy issues such as global warming. That may make it difficult for labor union approval to return to the same level of support it enjoyed from the 1930s through the early 2000s, when approval ratings were mostly in the 60% range. 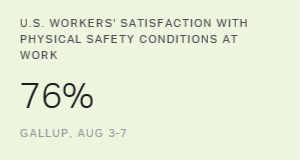 U.S. workers have become more satisfied with many aspects of their jobs, and are most positive about physical safety, relations with coworkers, flexibility and job security. Workers are least satisfied with stress and health benefits.

Democrats Lead Ranks of Both Union and State Workers