WASHINGTON, D.C. -- With the first presidential debate approaching, no one issue clearly dominates Americans' minds when they are asked to name the most important problem facing the U.S. The economy (14%) continues to lead the list, followed closely by dissatisfaction with government (11%) and jobs and unemployment (11%) as the top problem cited. Other top concerns for the U.S. include the election itself (8%), race relations (7%), immigration (6%), terrorism (5%), national security (5%) and national morals and ethics (5%).

These issues, as recorded in a Sept. 7-11 Gallup poll, will likely be among the most pressing issues atop Americans' minds as they watch Hillary Clinton and Donald Trump debate for the first time later this month.

Mentions of dissatisfaction with government are down slightly since August and are at their lowest point since October 2012. At the same time, the percentage of Americans who name elections or election reform as the greatest U.S. problem has been rising while the presidential campaign dominates political news coverage. In recent election years, a smaller percentage of Americans, typically 1% to 2%, have mentioned the election as the top problem for the U.S. But the issue has gained prominence over the past year, likely because of the controversies surrounding the two (highly unpopular) major-party nominees.

Potentially helpful for the Republicans, including Trump, is the slight edge Republicans have over the Democrats in Americans' view of which party can better handle the issue they named as the top problem. While similar to the results in 2014 and 2015, it is a markedly better positioning for the GOP than in recent presidential election years, when the Democrats enjoyed a strong edge on this question. As Americans tune in for the first presidential debate of 2016, the economy, dissatisfaction with government and unemployment are the issues they see as most pressing for the country.

While Americans have slightly greater faith in the GOP to handle the issue they deem most important, the Democratic Party is within striking distance on the question, underscoring the tight race this election. This is also the case for the specific issues of the economy and foreign affairs, for which Republicans' edge is smaller than it has been in the past. 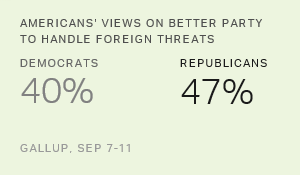 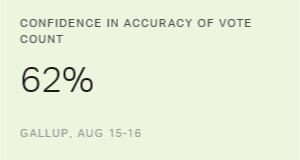 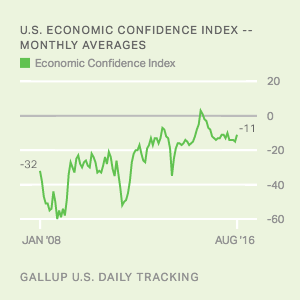