WASHINGTON, D.C. -- With the presidential election looming, more Americans cite the economy (17%) than any other issue as the most important U.S. problem in October, followed by dissatisfaction with the government (12%). Americans' concerns about the major problems facing the country are largely consistent with what they have been throughout 2016.

Racism and race relations is the only other issue that at least 10% of Americans mentioned as a top problem in the Oct. 5-9 survey. This is down slightly from its 2016 peak of 18% in July when racial tensions flared after police killed black men in Louisiana and Minnesota and a black man killed five police officers in Dallas.

Concerns About Economic Issues Down From Recent Election Years

Americans have typically named the economy in general as the top issue facing the country in 2016. As recently as September, registered voters chose Donald Trump over Hillary Clinton as the candidate better able to handle the economy, employment and taxes.

Though Trump holds a slight edge over Clinton among registered voters on economic issues, the 2016 presidential campaign has not centered on economic issues recently. In the days after Sunday's presidential debate, for example, a different set of issues has been foremost in Americans' thoughts about the campaign. According to Gallup's daily measurement of what Americans are hearing in the news, those issues include revelations that Trump has made lewd comments about women and Clinton's email scandal.

While Americans may cite the economy as the most important problem facing the country, the campaign in the past week has instead focused on the candidates' personal scandals. Thus, it is unclear to what extent Americans' current top concern will factor into this year's election outcome. 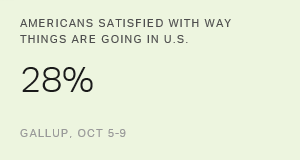 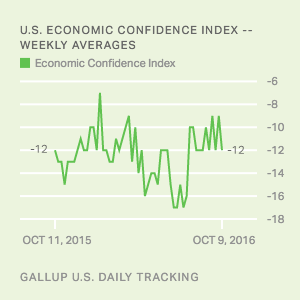