Though the index showed little movement, the past week was rife with events that could have influenced Americans' assessments of the economy. A major hurricane rolled through parts of the Southeast late in the week, prompting mass evacuations before the storm's arrival. Residents from Florida to the Carolinas saw significant damage and some loss of life.

Additionally, the Bureau of Labor Statistics announced Friday morning that the unemployment rate edged up in September to 5.0% from 4.9% the month before and that job growth was lower than expected.

The coincident timing of these events makes it difficult to pinpoint what effect, if any, either may have had on opinions of the economy. Attitudes certainly dipped more over the weekend compared with earlier in the week. For Monday through Thursday of last week, confidence stood at -10; over the weekend, it was -15. Economic confidence dipped late last week for reasons that are not totally clear -- perhaps temporary reasons if Hurricane Matthew influenced it. One important indication of this will be whether economic confidence rebounds this week or remains at the lower level reached over the weekend.

Results for this Gallup poll are based on telephone interviews conducted Oct. 3-9, 2016, on the Gallup U.S. Daily survey, with a random sample of 3,046 adults, aged 18 and older, living in all 50 U.S. states and the District of Columbia. For results based on the total sample of national adults, the margin of sampling error is ±2 percentage points at the 95% confidence level. All reported margins of sampling error include computed design effects for weighting. 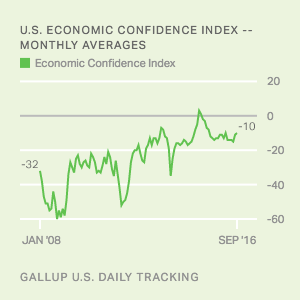 Gallup's U.S. Economic Confidence Index was -12 last week, marking the ninth consecutive week that confidence has dipped no lower than -12 and no higher than -9. 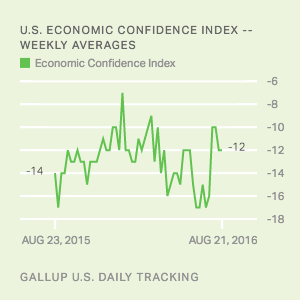