WASHINGTON, D.C. -- As Republican nominee Donald Trump enters the home stretch of his campaign for the U.S. presidency, more than two-thirds of Americans say they are dissatisfied with the way his campaign has been conducted. This level of dissatisfaction is 21 percentage points higher than for Democratic nominee Hillary Clinton's campaign and 10 points higher than for any nominee's since Gallup first asked the question in 2000.

The campaign that garnered the highest dissatisfaction other than Trump's was Republican nominee John McCain's in 2008, at 59%. Clinton's is the next highest at 48%.

On the flip side, the largest percentage to be satisfied came in 2008, when 66% expressed satisfaction with Barack Obama's campaign. The 29% who say they are satisfied with Trump's campaign is the lowest, followed by McCain's 40%.

Barely half of Republicans (51%) say they are satisfied with Trump's campaign, compared with 81% of Democrats satisfied with the Clinton campaign. Trump's tempestuous campaign this year has put him at odds with both Clinton supporters and leaders of his party. The two highest ranking Republicans in Congress, Senate Majority Leader Mitch McConnell and House Speaker Paul Ryan, denounced Trump's call last December to ban all Muslims from the U.S. Ryan has criticized Trump's comments on several occasions and has avoided public appearances with the presidential nominee. Numerous Republicans have said they would not vote for Trump, including 2012 presidential nominee Mitt Romney.

Two major groups driving the overall dissatisfaction with the campaigns are Republicans and whites.

Given high levels of dissatisfaction with the campaign, it is not surprising that 77% of the public believes this year's presidential campaign has been at least somewhat negative in tone. This percentage is 27 points higher than in any of the previous three elections (2000, 2004 and 2008) when Gallup asked the question. Fifty-nine percent say the tone has been "very negative," more than double the same responses in the three other elections.

There is widespread agreement across political and demographic groups that the 2016 presidential campaign's tone has been at least somewhat negative:

That wide disparity in Clinton's favor may not guarantee her an election win because the public is still split on which candidate is better on the important issues. But there is little doubt about how Americans will view the campaign's conduct once it is over. The question now is whether the long slide from the campaign of 2000, which only 15% saw as negative, to 2016, when 77% feel this way, will result in a move to improve the tone of future elections or whether it marks the new reality of presidential politics in the U.S. 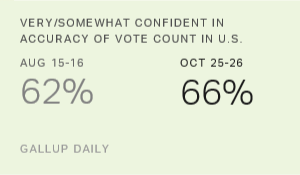 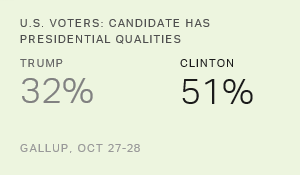 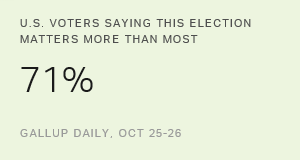