PRINCETON, N.J. -- Donald Trump and Hillary Clinton head into the final hours of the 2016 presidential campaign with the worst election-eve images of any major-party presidential candidates Gallup has measured back to 1956. Majorities of Americans now view each of them unfavorably on a 10-point favorability scale, a first for any presidential standard-bearer on this long-term Gallup trend. Trump's image is worse than Clinton's, however, with 61% viewing him negatively on the 10-point scale compared with 52% for her.

These findings are based on Gallup's historical "scalometer" favorability measure, which asks respondents for their general opinion of each candidate using a 10-point positive-to-negative scale. Respondents can use any number from +1 to +5 to indicate that they have a favorable view of a candidate, with +5 being highly favorable. They can use any number from -1 to -5 for an unfavorable view, with -5 being highly unfavorable. The latest survey was conducted by telephone Nov. 2-5 with a nationwide sample of U.S. adults.

The scalometer measure tends to produce higher positive ratings than the binary favorable/unfavorable choice that has been the mainstay of Gallup's favorability measurement since 1992, although that is currently more true for Clinton than for Trump. Clinton's straight-up "favorable" rating is 40% in Gallup Daily tracking for the week ending Nov. 6, while Trump's is 35%.

Both candidates' highly unfavorable ratings far outpace any Gallup has recorded before for a major-party presidential nominee, with the next-highest being Republican Barry Goldwater's 26% score in 1964. Even the former Alabama governor and proponent of racial segregation, George Wallace, who ran for president as a third-party candidate in 1968, earned a lower high unfavorability score that year (32%) than the 2016 candidates do today.

Americans' fundamental reactions to their 2016 presidential candidates are at least as negative today as when Clinton and Trump emerged as their respective parties' presumptive nominees in June. The subsequent ups and downs of the campaign have resulted in no meaningful change to Trump's image, and have had a modest negative effect on Clinton's, with her highly unfavorable rating inching up to match Trump's.

The 2016 election is the only one in Gallup's polling history to feature two broadly unpopular candidates. Further, when factoring in the high percentages viewing each very negatively, Trump and Clinton are the two most negatively reviewed U.S. presidential candidates of the modern era, and probably ever.

There has been a trend toward harsher ratings of candidates in recent elections. Indeed, as Gallup noted in June, no presidential candidate since Ronald Reagan in 1984 has ended a campaign with a total favorable scalometer score above 70%. But even in the last two elections, all candidates enjoyed total favorable scores of 55% or higher, far better than either candidate today.

In sum, this contest of historically unpopular candidates concludes with Clinton the apparent "lesser of two evils," and that could be what decides the election. 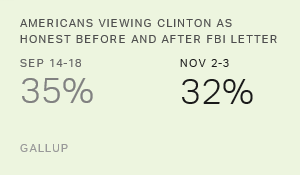 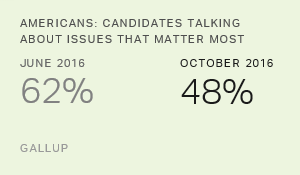 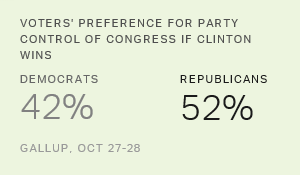