WASHINGTON, D.C. -- Americans' propensity to eat at restaurants is little changed from a decade ago. Sixty-one percent of U.S. adults recently reported they ate dinner at a restaurant at least once in the past week, similar to the 60% found in 2008. The rate was a bit higher before the 2007-2009 recession, including 66% in 2003. Eating out is big business in America, comprising 4% of the U.S. gross domestic product. More than 1 million dining establishments accounted for an estimated $782 billion in sales in 2016. These results provide a good indication of real-world changes in Americans' dining habits.

Gallup's trend is based on polling conducted in December of each year, with the most recent survey fielded Dec. 7-11, 2016. The question does not specify what types of restaurants respondents should consider in their answer, and thus could include fast food and the rapidly growing fast-casual sector, as well as more formal sit-down experiences. Regardless, any variation in how different respondents define what constitutes a "restaurant" likely would be constant over time.

Fairly consistent with past years, 45% of all Americans reported going out to eat one or two times during the past week. A much smaller proportion -- 16% -- ate out three or more times.

Income Less of a Factor for Young Adults

In analyzing these relationships using combined Gallup data since 2003, it appears that income differences in dining out are most apparent in those aged 55 and older. Among this group, the percentage eating out at least weekly tumbles from 73% of those in the highest income group to 38% of those in the lowest.

The income-related drop in weekly dining is slightly less steep among middle-aged adults, falling from 74% to 46%. It is far less pronounced among young adults, dipping from 78% to 60%.

Americans' options for eating dinner continue to expand, including a few that could undercut the restaurant industry: meal preparation services that deliver fresh ingredients and recipes to your front door, smartphone apps that streamline food takeout, and high-quality food bars available at many grocery chains. The relative stability in the percentage of Americans eating out is thus a positive finding for the restaurant industry -- perhaps a testament to the expansion of higher-end fast-food chains that provide good value for the extra expense, as well as convenience and the social benefits of eating out.

The good news for restaurants is that young adults are among their most frequent customers and that even young adults with lower incomes find a way to eat out multiple times a week. How well restaurants do in the future could depend on how well they retain these customers into middle age as financial pressures to cut back typically mount. 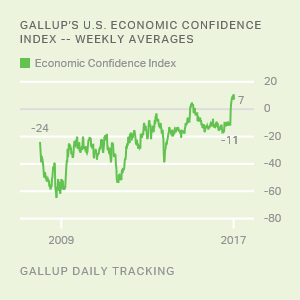 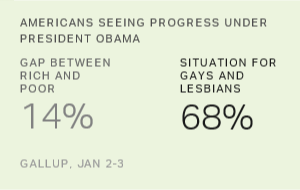 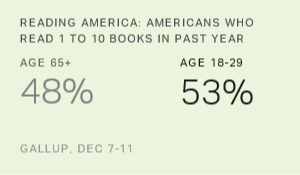 Rumors of the Demise of Books Greatly Exaggerated

Americans are still reading books, with the largest percentage saying they read between one and 10 books in the past year. Seniors are reading roughly the same amount of books compared with younger Americans.